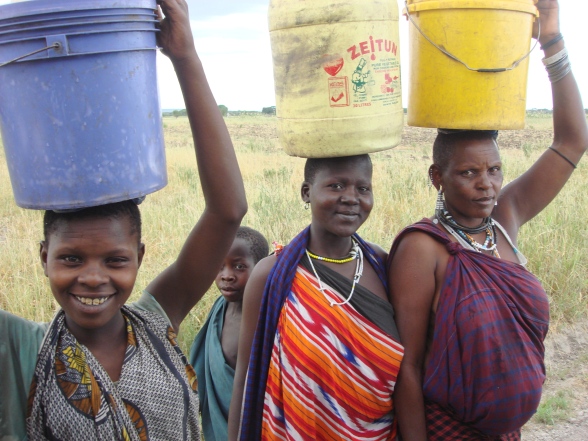 we spotted a group of women and children on the side of the road, each carrying a container of water on top of their head. On the other side of the road were 3 young boys herding goats. Adam, our Maasai guide with Proud African Safaris, stopped to talk with them and to give each one a package of cookies and a bottle of water. 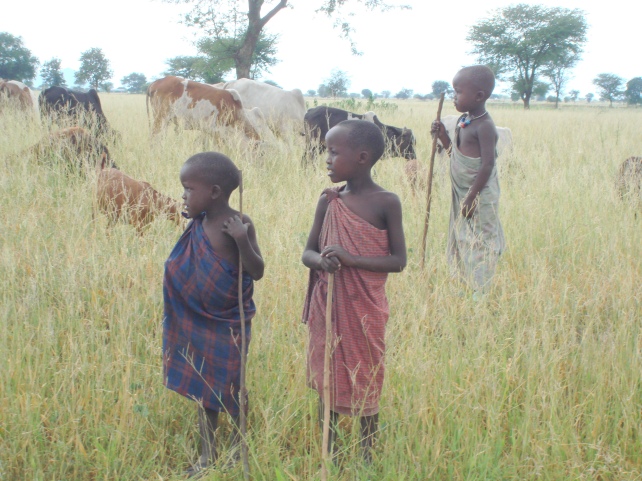 They were out doing their daily duties for their village and had no food or water with them. After a short visit, we continued on to their village, MBuyni.

Twelve older ladies and 6 Warriors welcomed us into MBuyni Village near Arusha, Tanzania. 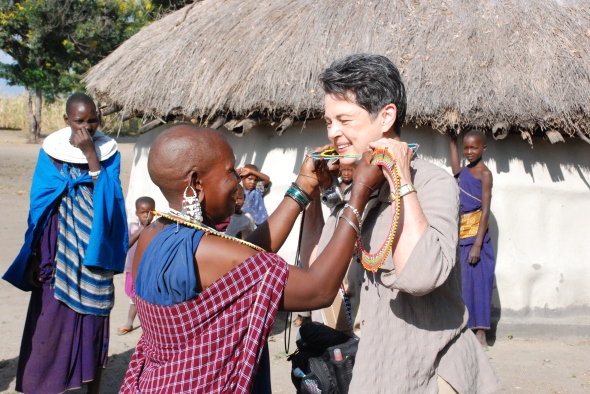 But, before I could do anything, the ladies had draped a 4×4 ft. maroon square cloth, the clothes that the Maasai wear, around me and put one of their beautiful handmade bead collars around my neck. That is when I noticed the smell. The Maasai ladies smelled of an odor when they tied the blanket around my body. The odor was distinctive and one I had never smelled except on the Maasai. 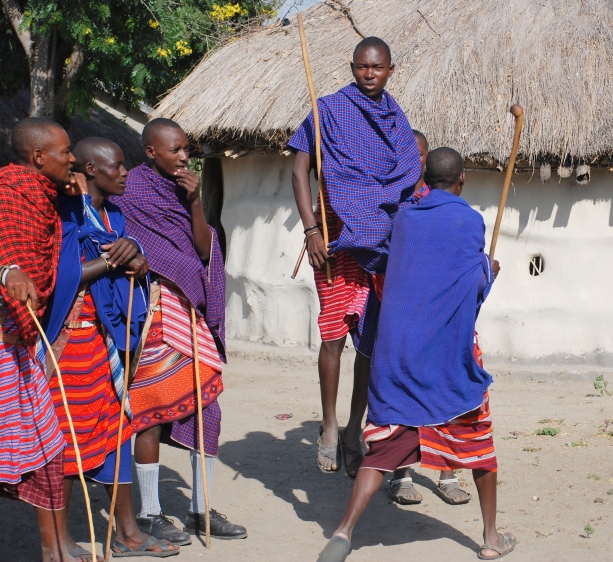 It was not perspiration or any normal body odor. The blanket tied at my shoulder just reeked of the smell and it was a rotten, rancid smell.

But I didn’t have time to solve the smell problem because the ladies were pulling me into the Adumu, the high jumping dance of the Maasai with the deep chanting rhythmic song. The men lined up and started that rolling chant, then, the high jumping followed where 1-2 junior warriors got into the center to show their jumping skills. Their bodies were rigid and their faces were deep in concentration as they jumped 2-3 feet in the air. The chant recalled legendary cattle raids, battles and deeds of brave men. The Junior Warrior who jumped the highest won the dance. 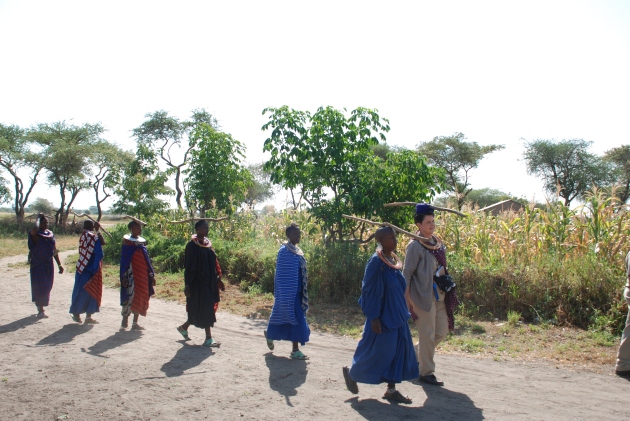 Adam must have said the magic words to the village junior elder or the ladies needed an extra hand because I was then asked to help them carry in the logs they had gathered that day from the surrounding area. On top of my head, a lady placed a cloth rolled in a circle topped with a 6 ft. log on top of the cloth. It didn’t hurt my head at all and I figured out that the cloth made my head flat so the log would not fall off. It was much easier than I expected and I soon learned that I could walk and balance the log at the same time. 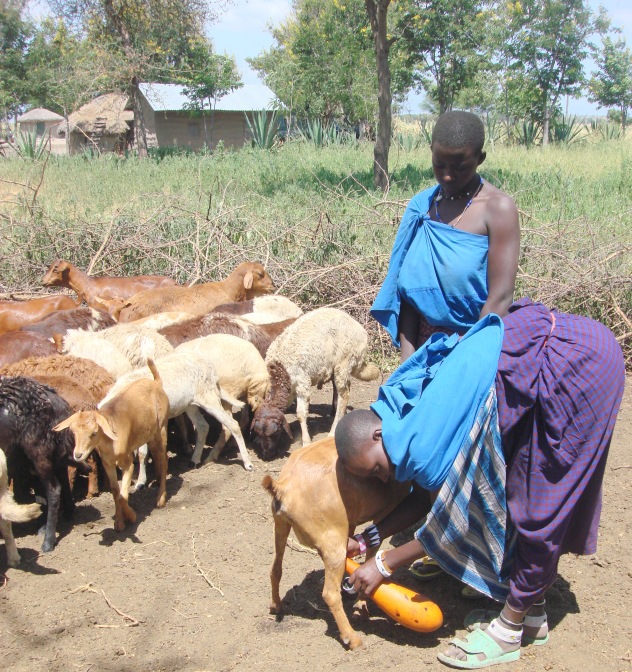 And so I walked about 1 block into one of the Maasai’s round plaster houses with a thatched roof.

Having succeeded at that, I now was on a high that I could do many things Maasai, but I stopped at their offer to milk a goat. It was time for them to show me how they milk a goat into a calabash (gourd) and then add blood from a young calf to make the protein-rich milk-blood drink that is consumed on 3 special occasions;  at child birth, when a person is sick and when a boy is circumcised. 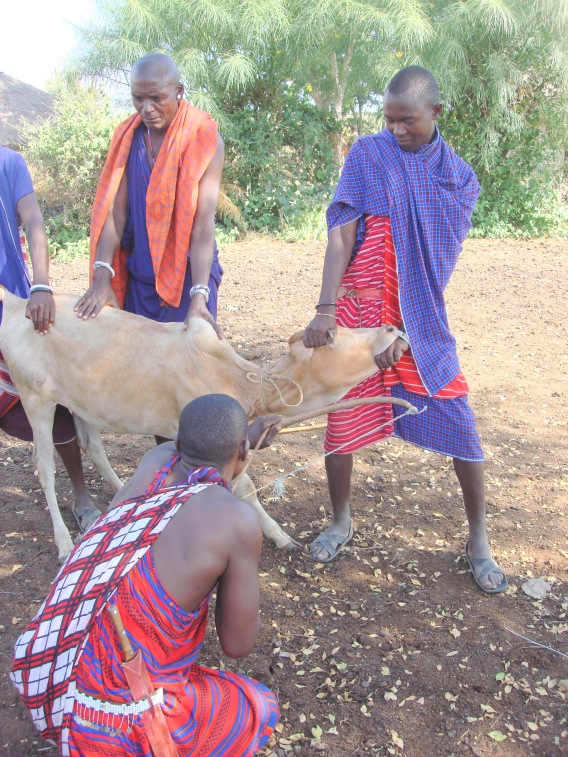 First, they caught a calf in the kraal, a pen to hold livestock that is made of acacia tree thorn branches piled on top of each other to make a 3-4 ft. barrier and built by the men. A heifer was caught and a rope tied around its neck so the blood would pool up and the warrior then hit the bulge of blood using a bow and arrow and the blood squirted right into the calabash. Then, they caught a goat and milked it into the calabash gourd. Now they had the important Maasai ceremonial drink.

I still had more questions so I met with the village Junior Elder and several of his wives in his house. 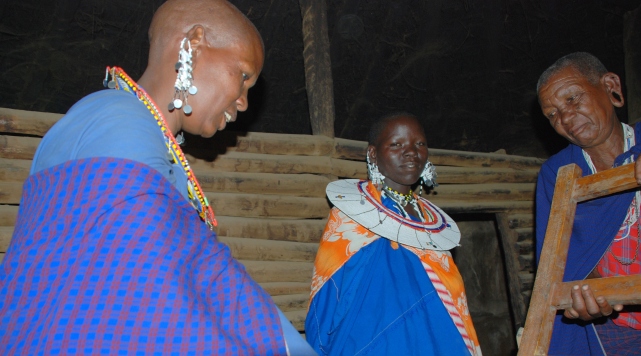 It was an interesting feeling being inside the round house with nothing but wives and log walls and ceiling. First I met the number one wife and she sat perfect in her chair and did not move the entire time. She had on a big white beaded collar and was a beautiful lady but she never smiled. And more wives followed. I understood that a Maasai could have as many wives as he could afford. Then we met 2 other ladies who were friendly, smiling and welcoming.  Formalities out of the way, the Junior Elder and I sat on stools and began our visit. 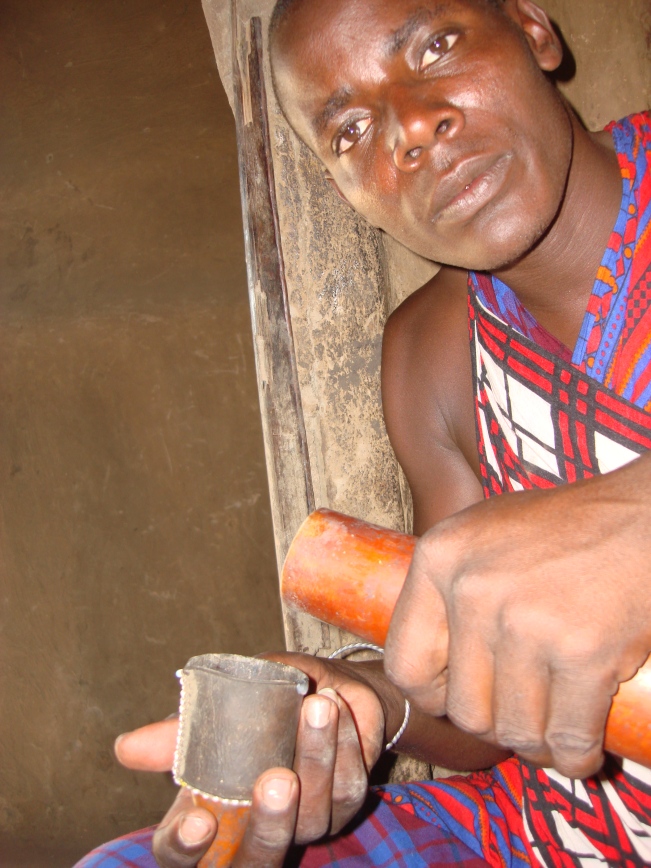 Circumcision was the first question and he answered candidly. Every 7 years is “the season” for circumcision, signifying the passage of male childhood so all males within a certain age are included in the ceremonies. Circumcision of females is not performed often these days.

At 5 a.m. they enter a creek or river to get their body cold, and exit to let the blowing wind cool and numb the body further so less pain is felt. At 6 a.m.it is time for the procedure. Now called a Moran, new recruits to the rank of warrior, herbs are placed on the incision and the pain begins. A man does not show pain in his eyes or on his face so a male who shows no pain brings honor to his parents.

Several days of feasting, drinking and celebration follows the circumcision where the blood-milk drink is consumed by the new Moran. The Morani are given only a 3×3 ft. black square fabric to wear, plus the ostrich feather headdress. Their faces must be whitened with chalk for up to 2 months while the Morani make it on their own to prove manhood and to pass into the first age-set of the Maasai. The young Morani begin to grow their hair and regularly apply red ochre that they get from the bark of an acacia tree. They cannot be around the village when healing. Following the 2-month period, the ceremony to bless the new warriors takes place.

When I was in Tanzania in 2004, I spotted 4 Morani walking on the side of the highway to Ngorongoro Crater wearing their black blankets, white faces and begging for a ride and money. I mentioned this to our Maasai elder game driver on the Tauck World Discovery Tanzania Safari who said if the boy’s parents knew what they were doing, there would be deep punishment. 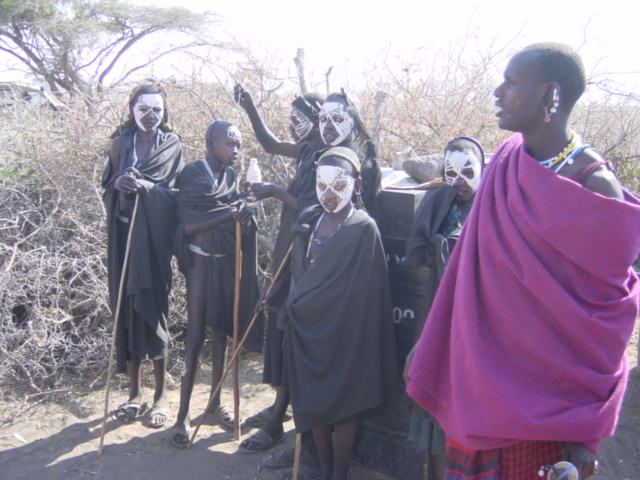 The boys must stay away from people and their village and make it on their own for up to 2 months in the wild to prove manhood and to prove no pain. Eating in their mother’s house and sisters watching them eat is forbidden.

When I visited a Maasai boma village in northern Tanzania on that same trip, we saw 6 Morani boys in their black blankets, white faces and Junior Elder in charge of them. It was not explained to us why they were in the village during their “proving manhood period”. 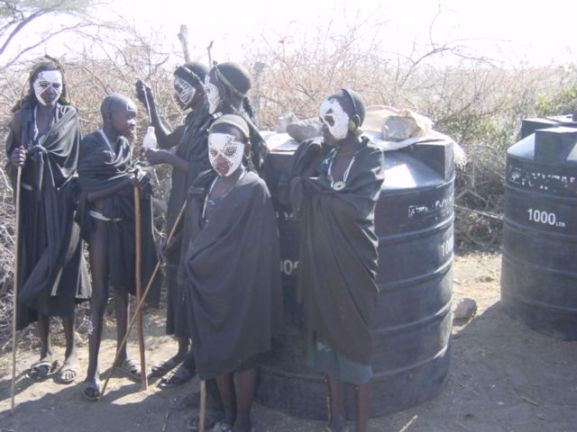 The Adumu high jump dance and singing that goes with it are performed regularly before and after the Moran age. In the past, killing a lion and cattle-raiding expeditions were a popular test of bravery. Nowadays, they have been outlawed so Morani spend much of their time in mock battles.

The senior warriors graduate to junior elders at the Eunoto ceremony, where the Morani arrive in full regalia every 15 years. Their heads are covered in red ochre, with the lion’s mane and ostrich feather headdress. Maasai gather from all over to participate in the ceremony, where the Moran’s mother shaves his head, cutting the ties of warrior hood. 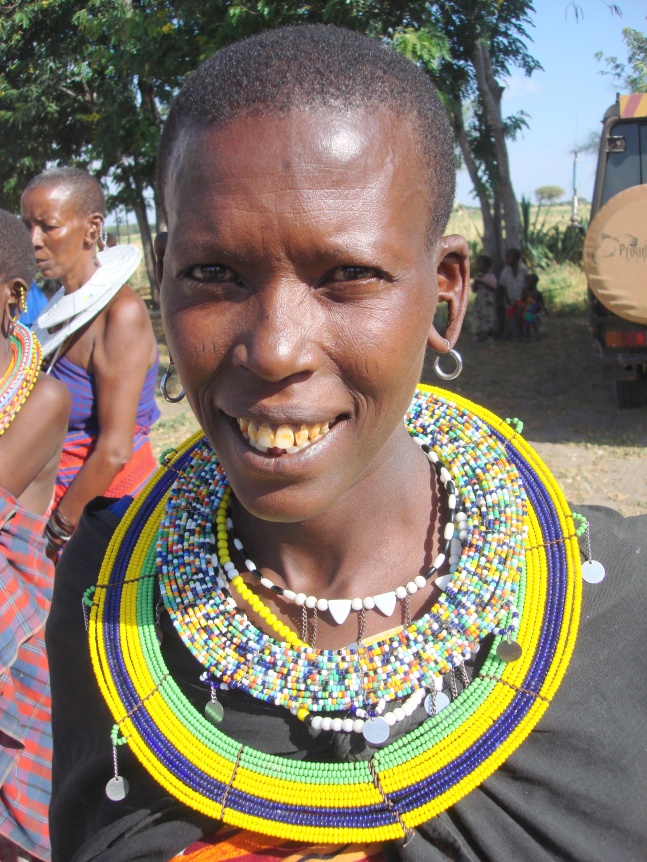 Our visit ended and it was time for us to make it to Arusha, Tanzania. But before I could leave, I had to find out what the smell was on the Maasai women. Adam clued us in on the secret; the ladies rub cow milk butterfat all over their skin to protect them and to keep the skin soft .  After a while, the butter spoils and gives off the rancid odor from their beautiful sultry satiny skin.