Forty-eight Karo people arrived at my birthday party by suddenly appearing from the bush using  the light of the full moon to find their way.

Before the party could begin, they had to finish dressing  at the bush lodge by painting their bodies with white paint. For 30 minutes, each one applied their world famous body designs right in front of me using white rock powder and water. 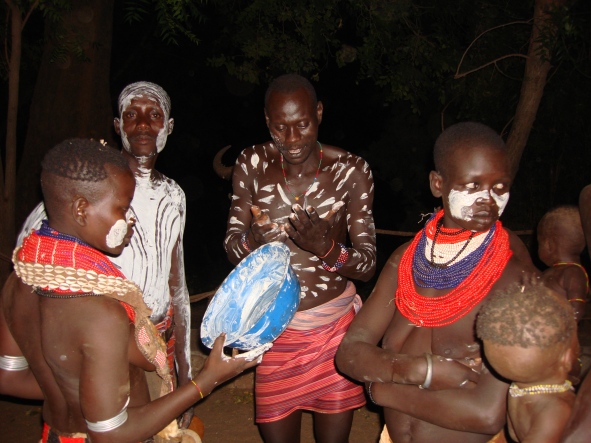 And what designs they made while chanting songs about love, war and life.

But that wasn’t all that these Karo people from the Omo Valley of Ethiopia had for my birthday.

Soon the dancing started as the men lined up opposite each other and competed with the highest jump possible, all while chanting a rhythmic beat. 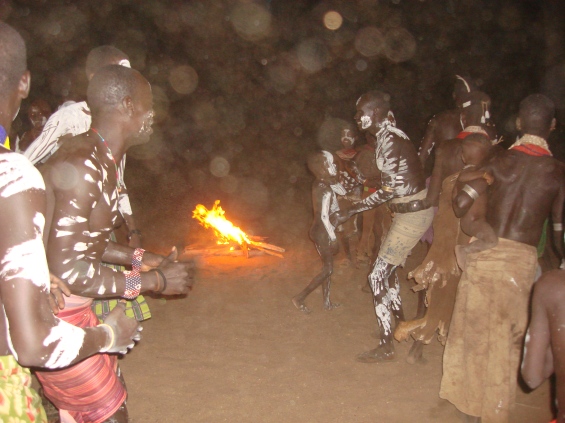 First one and then another would jump between the two lines and continued jumping as high as he could until he made it to the other side.

Then it was the ladies time to perform their dances.

What a treat to see the ladies do the monkey dance, the wild dog, and 5 other dances. In 3 separate lines, the ladies squatted, hopped and sounded like a monkey. Then they barked and chanted like wild dogs while scooting around in a circle. One after the other, the ladies continued their outstanding performance.

As I sat in the seat of honor next to the old chief of this Karo tribe, I noticed the young children were joining in the dancing behind their parents and  keeping up with the beat until it was their time to perform one day. And while all the dancing occurred, the older children tended the infants that couldn’t yet dance.

They even brought flowers and a birthday cake for me. The “flowers” were rose petals in a Coke bottle and the “cake” was sand and a candle in a jar.

An hour later, the 48 Karo people disappeared into the bush just as fast as they first appeared walking by the light of the full moon. I asked my guide Daniel Tesfaye of  Kibran Tours of Ethiopia, what he paid them for this outstanding party and he replied, $100 US Dollars. To me, it was priceless.