When we arrived, the fire was raging with flames shooting 10 feet in the air, while a 12-man chorus was sitting on the ground in the outskirts  of the vacant lot, making a beat with their 5-foot- tall bamboo poles by  hitting rocks, poles or the ground. Not knowing what to expect, waiting and watching proved to be very educational as a huge pile of scrap wood near the fire was noticed and then they appeared from the dark, one by one, in view of the fire’s glow.

Each dancer that appeared was covered head to toe in native plants from the bush and each looked like little green men from Mars. Their skirt was made of fresh  green raffia, arms and legs were painted white, and a 2-foot tall red conical hat with a 6 ft.wire-like vine sticking up from it covered the head.

Pandanus leaves hung all around the hat. Attached on this 6 ft long wire-like vine was a small clump of white feathers every 12 inches. And a bark cloth tail was  pinned at the base of the spin. This was the beginning of the Baining night fire dance in Rabaul, New Britain Island, Papua New Guinea. The Baining live in the East New Britain Province on the Gazelle Peninsula of Papua New Guinea and these night fire dances are for initiation into adulthood, to celebrate a good harvest or the arrival of a new child, or to commemorate the dead.

The fire dances are by and for men only, represent the spirits of various animals in the bush and show the various male activities in the bush.

Each one of the 6 dancers appeared suddenly from the dark and circled the fire to a beat from the 12-men bamboo pole chorus. Each one then waited by the fire for another dancer to appear from the dark.

When all six dancers had made their appearance, in unison, they began to circle the fire, around and around they went until they were almost dizzy. Suddenly, another dancer appeared from the dark but this dancer was different. 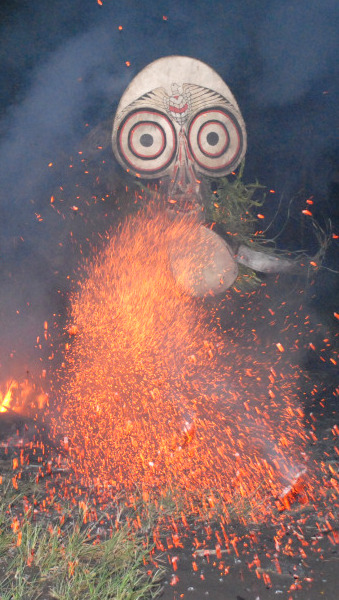 He had a huge 3×5 foot off-white bark cloth tapas mask that covered his face with green pandanus side panels hanging down. . 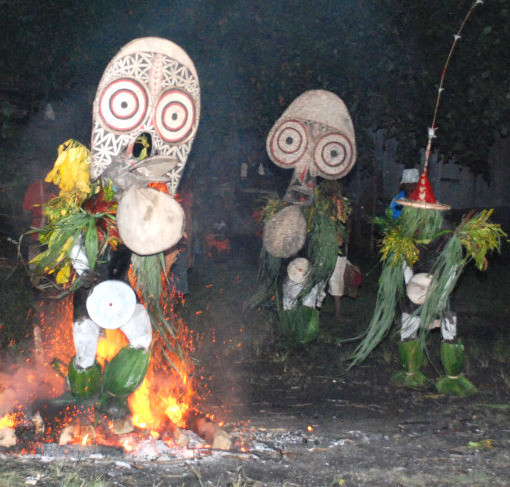 The mask  had large red eyes painted on it that looked like Target’s bull’s eye symbol and trefoil plant designs on it. The paint for the masks came from berries and tree sap. 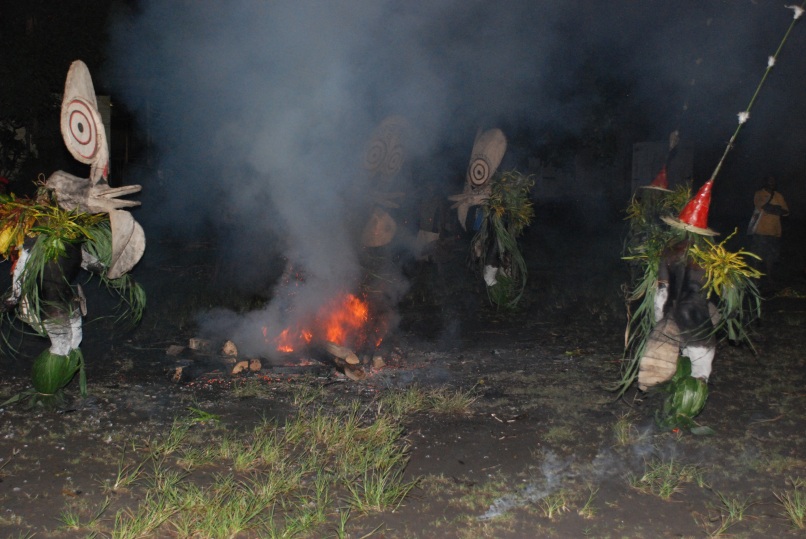 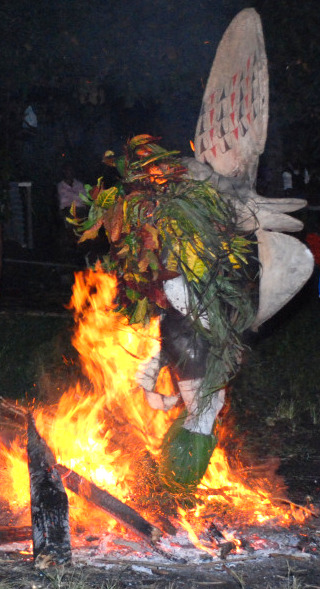 This dancer wore a huge off-white mask made of bark cloth that covered the head like a helmet. The bark was obtained from trees where the outer bark was slipped off after being beaten to loosen. Then, the “cloth’ was dipped in water, stretched over a bamboo frame, and attached with vines or strips of bark. Hanging from the mask was a bamboo trumpet that represented the mouth and below it was an oblong circle that looked like a big dinner plate. Covering the dancer’s private parts was another off-white bark cloth oblong circle.  Arms and legs were painted white and a cape and chaps made of pandanus leaves also was worn.

Then the real action began. These dancers joined the other 6 circling dancers until one complete chorus had been finished, and that chorus could last a long time. It was not a tune of exact length. When it ended, it was time for the masked dancers to run through the raging fire barefooted while kicking the pile of coals in the air. 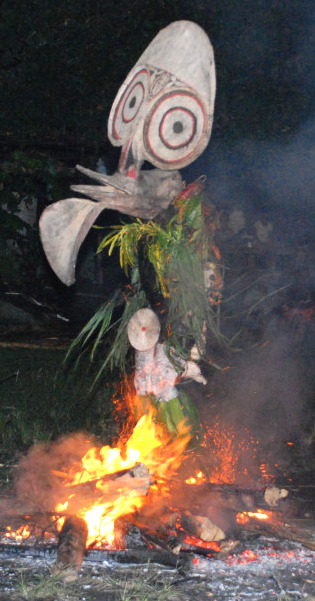 The flying sparks further illuminated the dancers in a mystical way. After the coal kicking, each masked dancer then rejoined the other circling dancers and then another masked dancer took his turn at kicking the coals. And it continued like this until each of the 4 masked dancers had  kicked the coals.

This went on all night while men kept the fire blazing brightly and the masked dancers kept kicking the coals. Near dawn, they suddenly disappeared into the dark and the masked spirits had been frightened away from  the village. And Baining women did not go near the site. And the Tauck World Discovery visitors stood and watched in amazement.  Photo Copy ©  2015 carolyntravels.com