Visiting communist countries is interesting to me because they only show you their beautiful monuments and places.

So, for my 164th country to visit, I chose North Korea, and it was a 4-day whirl-wind 12-hours-a-day tour and we enjoyed every minute of it. I read somewhere that only around 2,500 Americans have ever toured North Korea even though it is legal for Americans to visit. I decided to take a tour of the country also known as the Democratic People’s Republic of Korea or DPRK. They believe they should be reunified with South Korea and that there is only one Korea, not a North or South.

To get there, I used a Canadian tour company, Bestway Tours and Safaris, that selected Koryo Tours of Beijing, China as the tour company I was to use. Koryo Tours is the #1 company to take visitors to North Korea. And they are busy because tourism to North Korea is rising yearly. Everything on the tour was paid for in advance except tips and souvenirs. Koryo Tours reminded us: don’t forget to tip and give chocolate and cigarettes. We were totally pleased with Koryo Tours’ services and recommend them for an outstanding tour.

Our North Korean leaders, Khoi and Mr. Lee with the Korean International Tour Company, and Sarah Davies with Koryo Tours of Beijing, were outstanding in every way. All 3 tour leaders were with us every minute we were touring. We even had a North Korean video photographer with us at all times to record the tour for us who worked also with the Korean International Tourist Company, the official tour company of the DPRK, in Pyongyang. At the end of the tour we could buy a DVD of our tour. On the tour, we went where the government guides took us and we enjoyed it.

Before departing on our tour, we were given suggestions on clothing and items to bring and not bring and general rules of the tour and of North Korea. We stayed at the Yanggakdo Hotel on an island in the Taedong River in Pyongyang, the capital of North Korea, and we could not leave the island except in the tour bus. The hotel was clean and comfortable with good daily breakfasts and book stores and souvenir shops.

From Beijing, we flew by Koryo Airlines to Pyongyang, the capital of DPRK and a city of about 3 million people. We stayed two nights in that city and another in the city of Kaesong, near the demilitarized zone or DMZ. One more night in Yanggakdo Hotel in Pyongyang gave us time to pack and buy souvenirs before we flew back to Beijing.

We started our tour by viewing the 90-foot-high magnificent bronze statues of Kim Il- Sung and Kim Jong-Il overlooking Pyongyang from a hill. They were flanked by huge bronze-relief monuments showing the history of DPRK. We placed flowers at the base of the statues to show respect.

Everywhere we went we saw photos and monuments of Kim Il-Sung and Kim Jong-Il, the North Korean former leaders. All government officials wear a pin on their lapel with the photo of their two past leaders on it.

We saw the beautiful Arch of Triumph that celebrates the anniversary of the DPRK. It is 180 feet high and is bigger than the Arc d’Triumph in Paris.

We went to the top of the the nearby Juche Tower Monument to view the city of Pyongyang. Juche represents self-reliance.

We saw Kim Il-Sung University, Kim Chaek University of Technology, and Kim Il-Sung Square, where the military parades are held. Every foot of the square is marked with white paint to indicate where each person in the parade is to stand, our guide told us.

At the beautiful, marble Mangyongdae Schoolchildren’s Palace we enjoyed the children’s very professional performance of dance, music, gymnastics, and acrobatics. The high quality of the show astounded us all. The school has up to 5,000 students. I learned that North Korea has 40 different alphabets. In a park, we saw school children sketching pagodas on a pad. And I just had to have my photo made with one of the children. 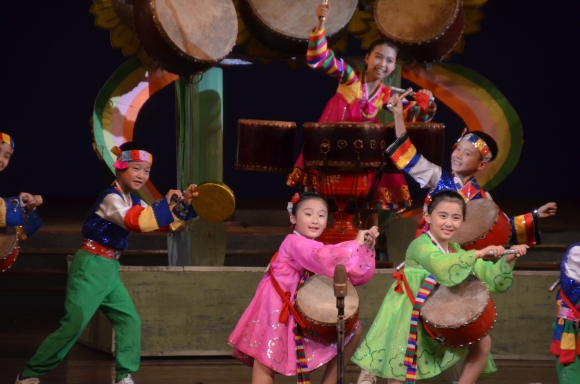 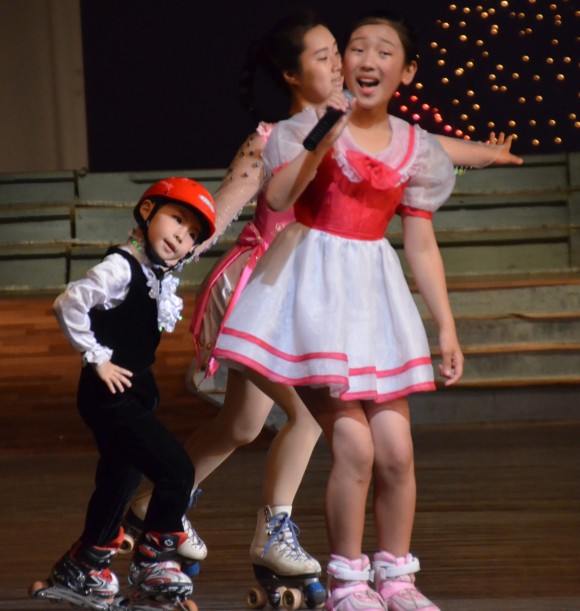 Most of the women school teachers wore the beautiful, traditional Korean dress (choson-ot), which reminded us we were in Korea.

The school children were dressed in a white blouse or shirt with a red bandanna, and a navy blue skirt or pants. 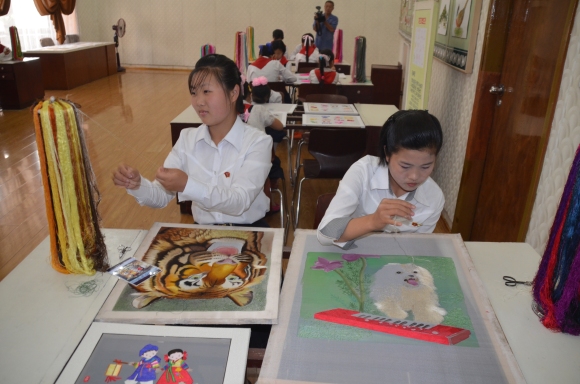 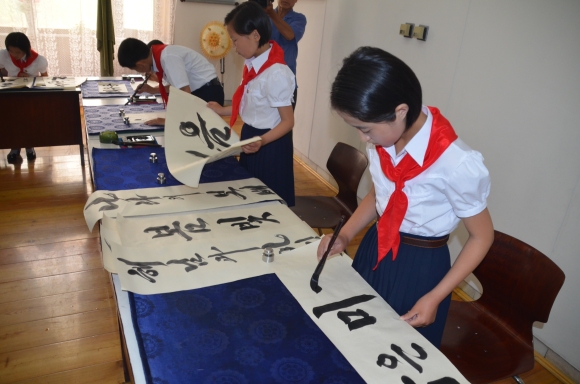 On the sidewalks of Pyongyang, I observed many sophisticated-looking men and women. Ladies were dressed in heels, hose, and nice dresses, and men dressed in black dress slacks and a white dress shirt. The ladies carried metallic-looking parasols with UV protection to protect them from the hot sun while walking several blocks to their destination. Every North Korean person I saw in Pyongyang had a beautiful, excellent figure and physique. Everyone we encountered was poised, professionally dressed, and had perfect manners. The ladies had their long hair pulled back behind their ears or tied up in a bun. 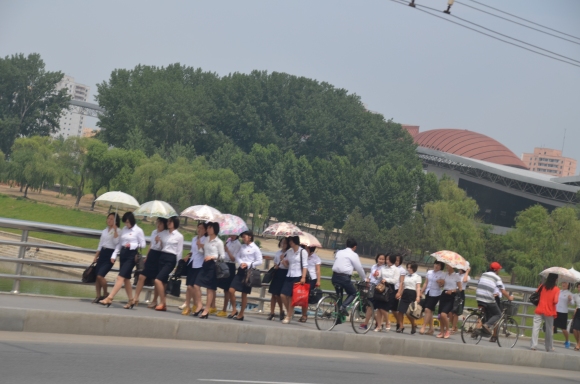 I asked our North Korean tour leader, Khoi, where I could get a parasol. Ten minutes later our bus arrived at a souvenir shop that sold them, and 5 women rushed out of the bus and immediately ran into the shop and grabbed parasols to purchase. We were not allowed to use North Korean won, but our own currency was accepted. Even though the umbrellas cost $35 each, we were very happy with our purchases. 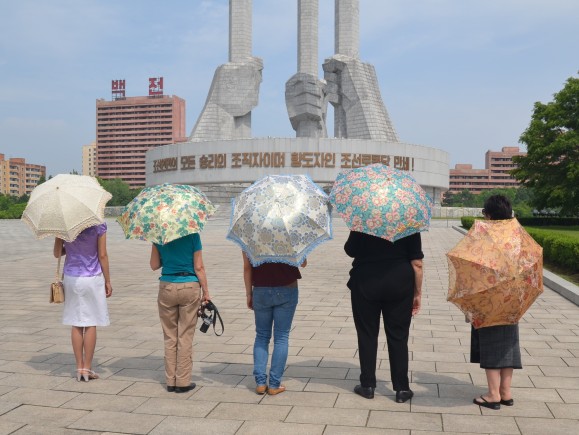 With our new gold metallic-looking UV-protection parasols in hand, we went to the 50-meter-high Party Foundation Monument that signifies a hammer for the worker, a sickle for the farmer, and a brush for the intellectual. There, we had many photos of our beautiful Korean parasols and the monument taken with us holding our umbrellas for all to see the different colors reflecting gold tones. We were so proud of our unique parasols and our North Korean guides were happy to see we were having so much fun with them. 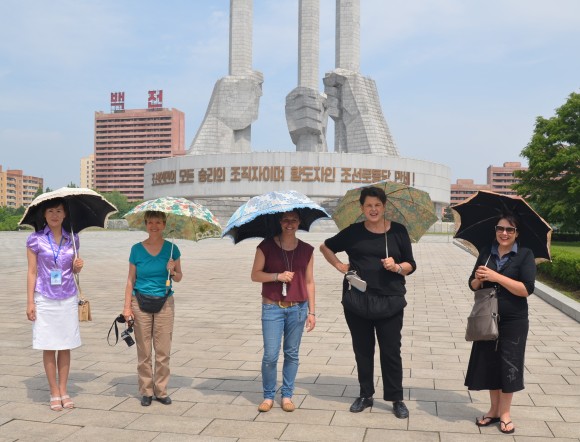 We visited the National Gift Museum where gifts from heads of state from many countries to Kim Il-Sung and Kim Jong-Il are on exhibit. The gifts are exquisite and one-of-a-kind priceless articles and objects.

We visited the boyhood home of Kim Il-Sung that had an intricately woven, artistically thatched roof. Outside the home is the well where he drew drinking water, and we were invited to drink the water from the well.

We had potato salad for our first food dish and found the Korean food to be very good and filling at each of the three daily provided meals. Special dinners were tasty, including a special BBQ dinner and a pansanggi dinner of 12 small golden dishes filled with different foods. And at all special dinners we sampled Soju, the Korean national rice wine that is 25% alcohol and very strong. At the Farewell Dinner we cooked duck over a table grill and enjoyed it with the strong rice wine. Dog meat soup is a special Korean dish, but I missed my chance to try it.

We had a “Hot Pot” dinner where the food is cooked in an individual pot filled with broth, spices, beans, meat, carrots, noodles, pork, salt, cucumbers, lettuce, and cabbage over a grill at each seat, all eaten with sticky rice.

We saw the outstanding-looking 105-floor, 3,000-room triangle-shaped Ryugyong Hotel, called the “Hotel of Doom.” It has been under construction since the 1980’s and still is not open. It dominates the skyline of Pyongyang. We saw many buildings of unique and creative architectural design in Pyongyang. Most buildings have been built since the end of the Korean War in 1953. Many of the buildings are pastel colored, ranging from light rose, green, gray, yellow, and pink to peach. 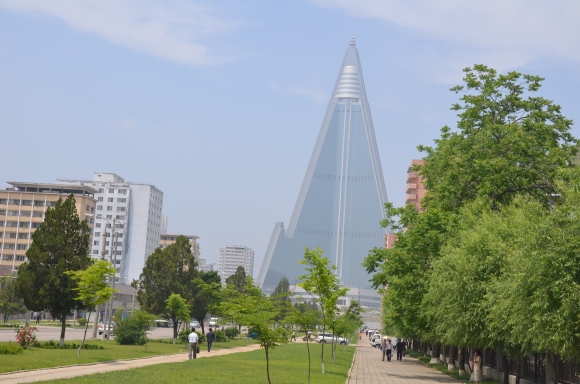 Everywhere that there was a TV or audio, day or night, we heard and saw opera performances, singing and beautiful flowers. Pyongyang was very quiet and peaceful. On the balconies of all apartment buildings the people had put out flowers and nothing else. Every balcony on every apartment at every building were all the same. 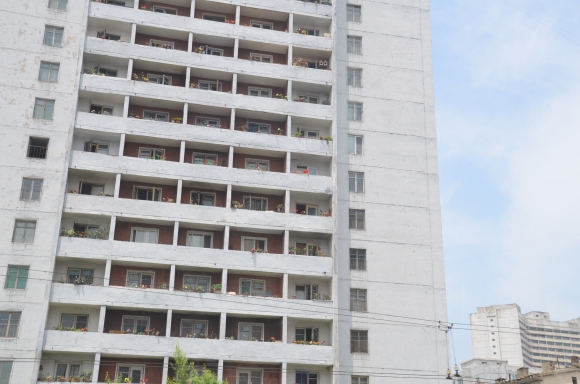 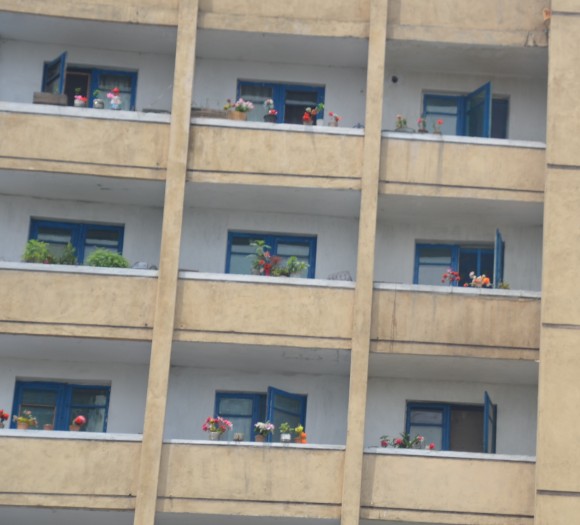 We stopped at three Metro stations on the underground 2-line Metro system that is 35 kilometers long, has 17 stops, and serves up to 300,000 riders daily. The incredible stations had chandeliers and wall paintings depicting the people and the DPKR’s leaders. All were just outstanding in their beauty. 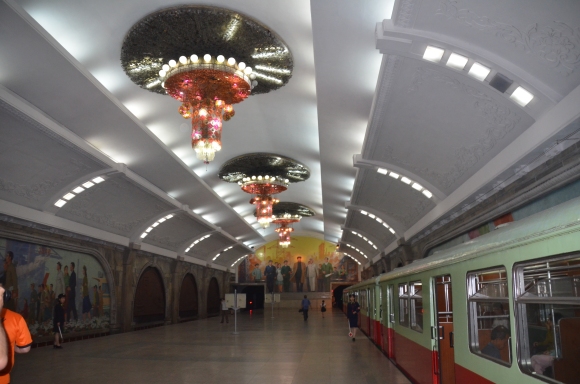 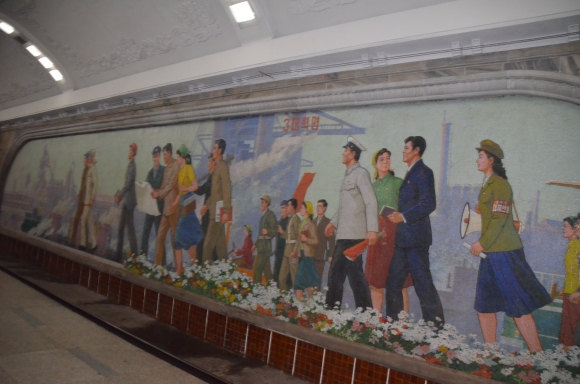 Public transportation above ground was full with people, and we saw many waiting at the bus stops. Almost no one has a car so the streets were nearly empty of vehicles. The mode of transportation is by walking, bicycle, bus, tram, and Metro. A liter of gas costs one Euro, which is approximately US$5.50 per gallon of gas. There were no traffic jams or wrecks anywhere. The trams have stars on each side that indicate how many years the tram had been wreck-free, our guide told us.

Strips of land adjacent to Pyongyang’s main streets were being planted with seeds, then covered in plastic raised about six inches above the ground to create a hothouse effect, making the grass grow faster. Persons balanced on boards above the grass, squatting and working these strips of grass daily, picking weeds, carefully hand-watering with a watering can, and not stepping on the grass bed during this entire process. One person on our tour saw a North Korean man carefully manicuring a new grass yard using tweezers. And many people in plastic raincoats worked through the rain on the grass strips.

We’re halfway through our 96-hour tour. Next comes North Korea, part 2 and the DMZ.

Awesome! Ive always been interested in North Korea for some reason and think it would be cool to have a tour myself.