As I stepped off the plane in Lhasa, Tibet, absolute joy came to me because I was still breathing at 12,000 feet. And I continued to breathe normally hour after hour, day after day, making the 4-day visit my dream come true.

It was the surprise of a lifetime because my lungs caused me great concern about visiting one of the highest cities in the world. At around 12,000 feet high, it was my first time to experience a super high altitude. I even Googled precautions suggested to be taken in a high altitude.

After consulting my physician, I was assured the altitude would not cause any breathing problems for me in Lhasa. And he was correct. I didn’t even know I was high in altitude and experienced no difference in my breathing at 1200 feet or 12,000 feet.

To make sure there would be no breathing problems, I even consulted a Travel Clinic. There, the altitude sickness pill, Acetazolamide, was prescribed and recommended that I follow the directions exactly as written for the medicine. It worked perfectly for me.

The first afternoon after arrival in Lhasa, we rested as recommended by all advisors. But the next day, we went full time seeing Lhasa, truly a place of the Gods on that Himalayan plateau with many of the culturally significant Tibetan Buddhist sites.

Potala Palace, the home of Dalai Lamas, was the first place we visited and the most glorious of all with 999 rooms on top of a hill totally viewable from 360 degrees. It overlooked everything. Now a museum and a UNESCO World Heritage Site, it was a magnificent discovering adventure.

Tibetans were performing their daily clockwise sacred circumambulation, called Kora in Tibetan. Carrying their prayer beads, they walked around the palace while rotating a prayer wheel clockwise in their hand and praying to Buddha. 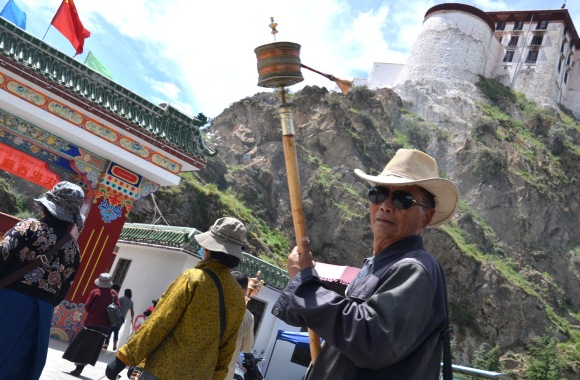 The faithful pray for good luck, protection, long life, good health, well being of others, wisdom, peace, and happiness, plus it is just good daily exercise. When we finished touring the Potala Palace, we joined the Tibetans in their circumambulation around it. 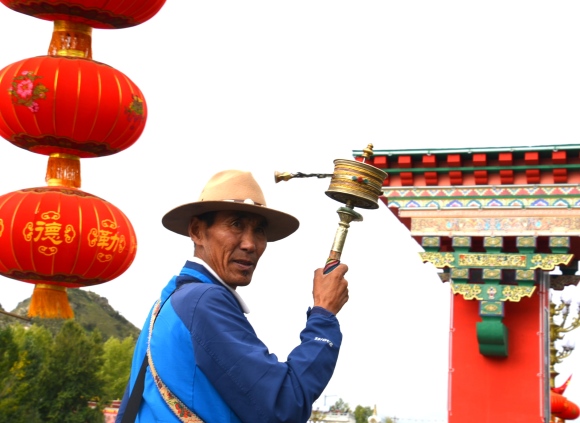 The most enlightening was the people and their faces and being allowed to experience a sliver of their lives on a particular day. And when the sun came out in the afternoon, we spent several hours in the large park full of beautiful landscapes, flowers, and people dressed in their native Tibetan clothing with apron. And I was still breathing just fine.

Our second UNESCO visit was the Dalai Lama’s Summer Palace, Norbulingka, with its very colorful décor and flowers everywhere. 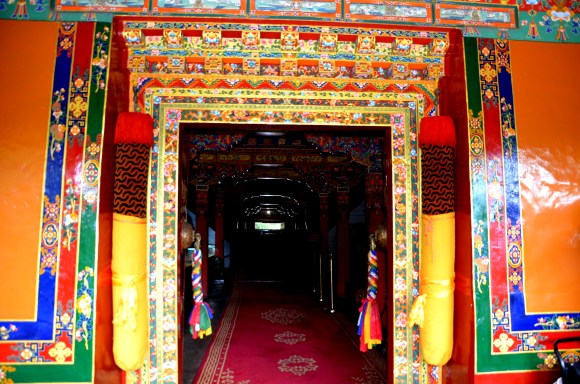 The palace was built by the 7th Dalai Lama in 1755 as the traditional summer palace and has the furnishings that the 14th Dalai Lama had until his exile in 1959 to India.

Serving as the administrative and religious centers, it is close to Portala Palace and has 1 of 3 parks adjoining it that remain of the 22 original parks in Lhasa. The highlight of this visit was the opportunity to dress like a Tibetan princess for a photo.

Our third UNESCO visit was to the most sacred and important Jokhang Temple, located in Bangkor Square in the old section of Lhasa that is the site of the most famous kora circumambulation ritual.

Here, pilgrims prostrate themselves daily continuously by lying stretched out face down on the ground.

Prostration involves the full body above the knees touching the ground especially the hands. This Buddhist practice shows reverence for the Triple Gem (comprising the Buddha, his teachings and the spiritual community) and other objects of great reverence and respect. After the pilgrim is face down on the ground, he then gets up, walks 3 short steps forward and prostrates himself again all around the Jokhang Temple or any sacred site until 108 prostrations have been performed. And many pilgrims do this daily. 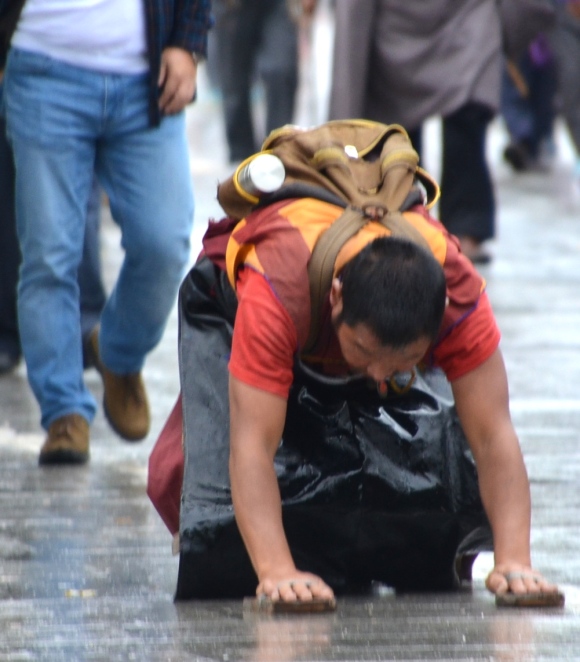 Buddhists believe prostration to be beneficial for practitioners because it is an experience of giving or veneration, an act to purify defilements especially conceit, a preparatory act before meditation, and an act that accumulates merit.

Each of the 108 prostration takes away defilement (greed, hate, delusion) and cleans a compartment in the mind. Sometimes a person has much anger, desire or a lazy mind and then must perform 300, 500 or 1000 prostrations. The person, then, is clean and is one with everything. Prostration purifies body, speech and mind. 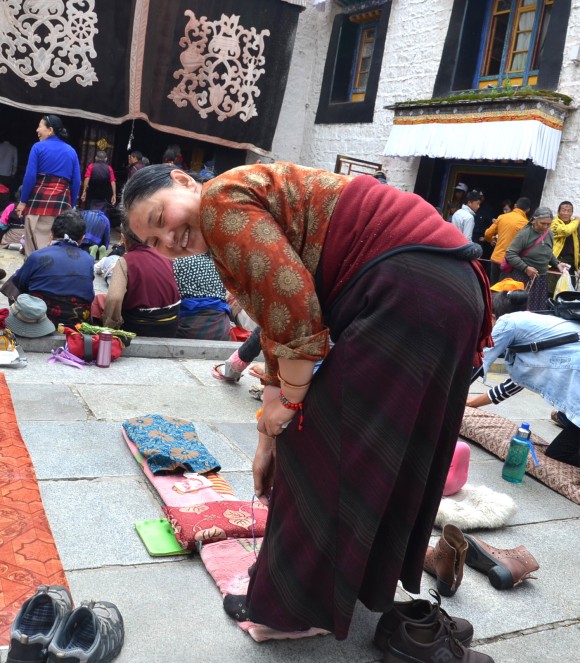 Others circumambulate clockwise around Jokhang Temple and Bangor Square to shop in the colorful stores, formed as a bustling market for Tibetan and foreign goods. And I was still breathing just fine as I shopped. 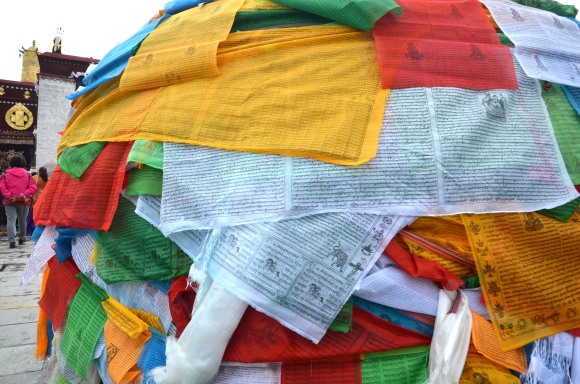 Two huge prayer flag poles in front of Jokhang Temple were loaded with prayer flags. It is believed the energy of the prayers and sacred mantras on the flags flown in the wind will bring all good things to all who see them and their families, friends, and all people throughout the world.

The red flags signify fire, blue for sky/space, green for water, yellow for earth and white for wind/air/clouds. 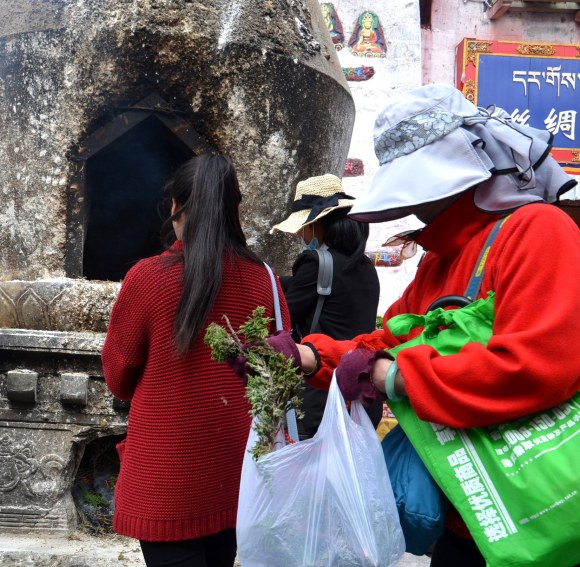 Large incense pots smoked 24 hours a day non-stop as worshipers regularly prayed as they put offerings into the pots. The incense smoke is not considered smoke because it communicates with the Gods. 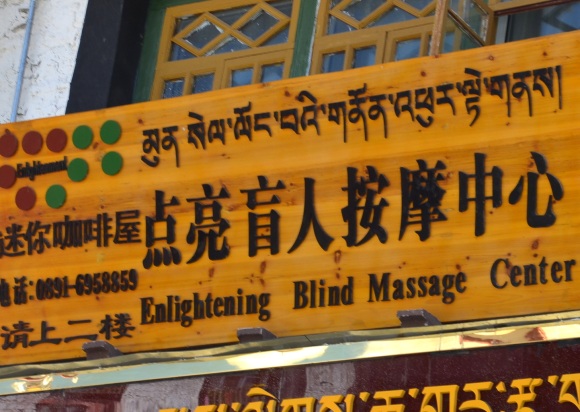 The wonderful visit to Lhasa ended at the Enlightened Blind Massage Center with a massage. Started by Kyila, a blind lady herself, who had a dream at age 12 to help blind people have an occupation, the center opened in 2014.

After studying massage in Beijing, the students then come to the center in Lhasa to gain work and experience and hopefully one day open their own massage center. Kyila also opened a kindergarten in 2011 for blind children and it is very successful.

Our wonderful enlightening adventure came to an end but the experience will remain with us always. 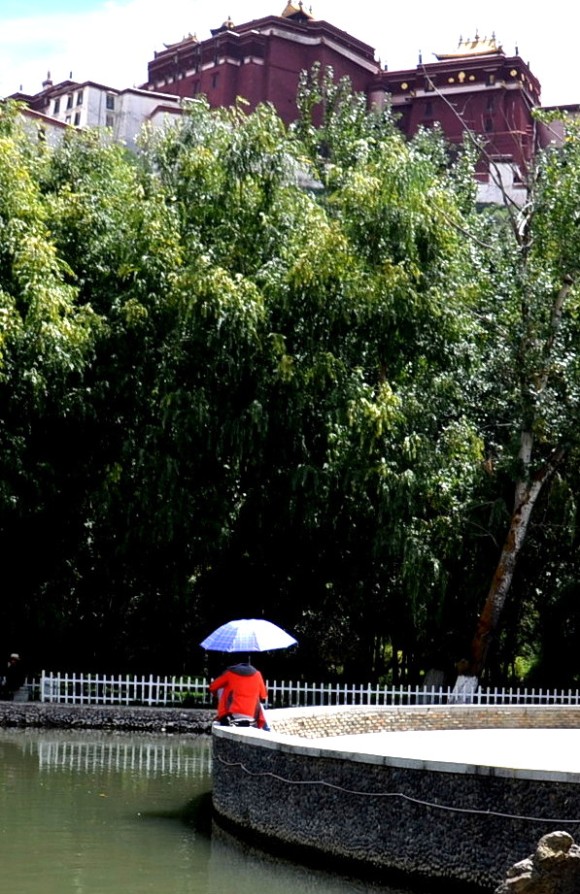 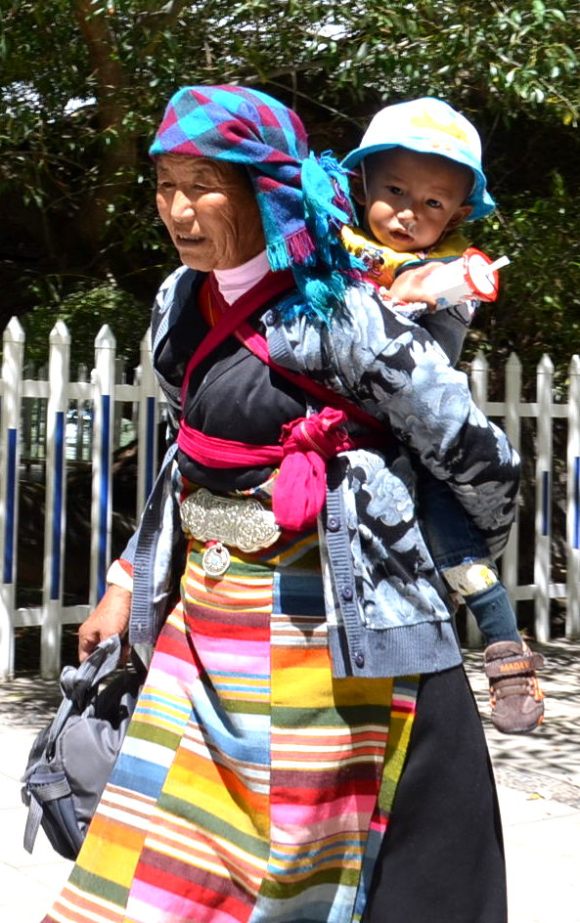 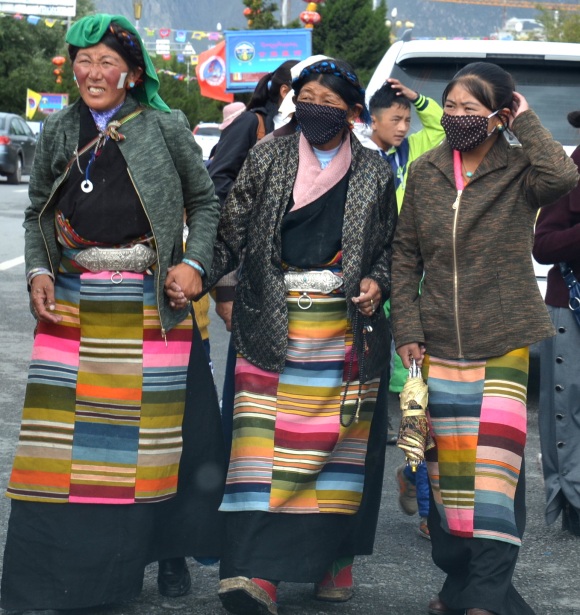 The beautiful and friendly Tibetan people, the sacred Jokhang Temple, the magnificent Portala Place, and the very colorful Norbulingka Palace were truly outstanding UNESCO treasurers. And I didn’t miss a breath of air the entire visit. 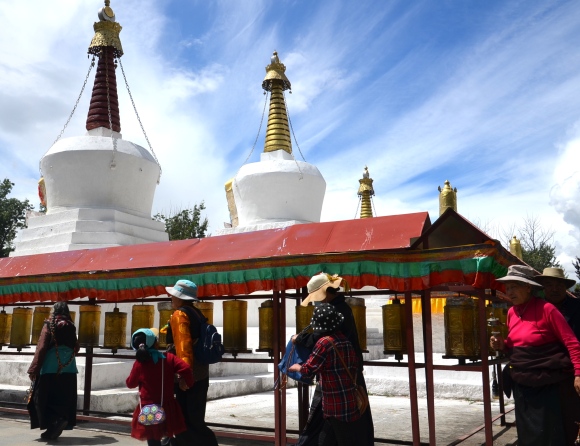 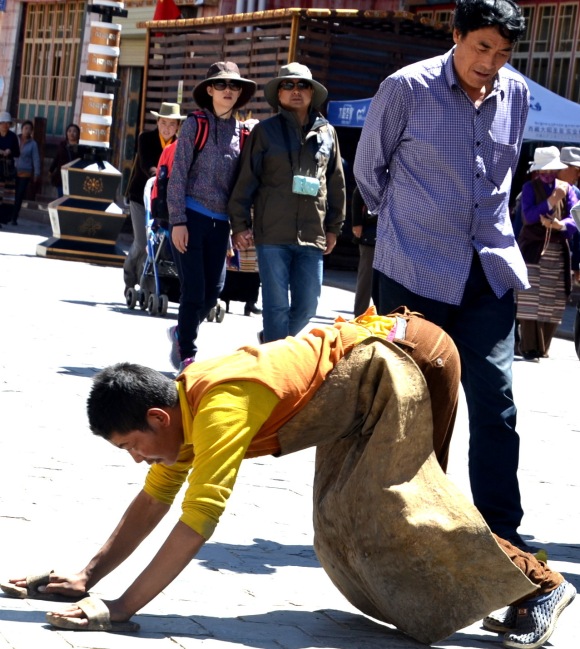 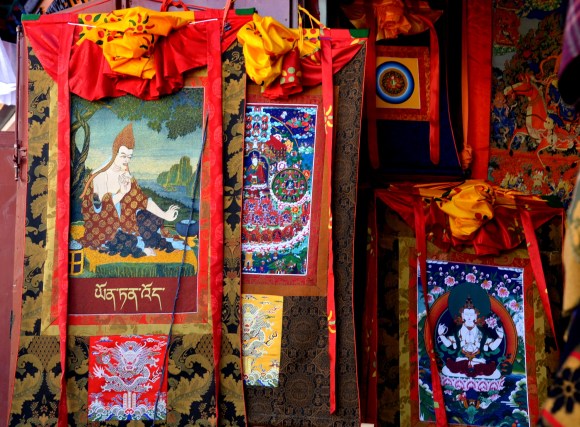 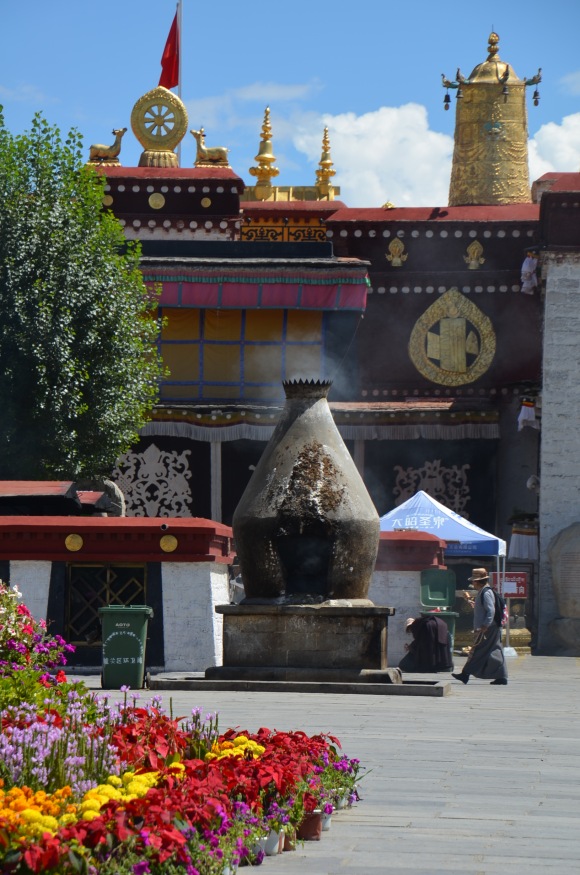