From the moment we saw them, we were scared. They were everywhere around us, gliding so effortlessly and fast. And we were told to shuffle our bare feet through the sand so we wouldn’t step on them or make them mad because then we would be in big trouble. And if we had water shoes on, we wouldn’t feel them.

This was the beginning of our experience on a sandbar located just inside Grand Cayman’s barrier reef. Here we met Madelyn, a member of a southern stingray school who over the past 20 years had become extremely friendly to humans. As soon as we arrived, Dwayne of Cayman Adventure Tours called her and she swam right up into his arms. About 40 inches wide and long, she seemed in great shape and was as ready to have fun with us as we were with her for more treats.

But first, Dwayne had to show us the trouble we would be in if we stepped on any of the sting rays or made them mad. Madelyn served as the model. Sting rays have about a 42- inch long whip-like tail with a 3-inch barb that shoots out to anything that bothers them. On the back side of the barb is a poison area which injures the offender fast. And stepping on a sting ray would cause that barb to be released. “Sting rays don’t bother you if you don’t bother them,” Dwayne said. So we made sure our steps were on sand not on sting rays.

Once we were able to see Madelyn and Dwayne interact, we became less scared. And the other sting rays that glided in and out among us in the 4-foot deep water didn’t hurt us. So we were confident all would be safe and fun now. And Madelyn gave us all an excellent performance.

Dwayne said anyone wanting to have a photo made with Madelyn could do so and Sharon was the second to meet her and have an encounter with that wild fish.  After touching her velvety skin on the top and the soft fish-like skin underneath her, Sharon screamed, as did everyone else who touched her. And Madelyn seemed to love it and waited for more. No one in the group had ever encountered a sting ray much less touched one. So screams from touching her were screams of joy for such a different experience and actually touching the skin of a sting ray safely.

“Touching Madelyn was like touching a soft loving pet,” Sharon explained after her most fun wild animal encounter ever. “She looked at me as I touched her and as she was held up, her mouth and nose underneath naturally shot out water. All of us seemed to bond together over the touching of Madelyn.” The next photo offered was one of Madelyn’s wings giving a back massage. Brandon and Joscelyn Evans turned their backs to the camera so the wing could do several flops on their back. Sharon explained after having her back massaged by Madelyn, “it was more like having a hand patting you on the back but it was a wonderful scary feeling because it was a sting ray touching you.” And it continued like this for several more persons wanting a private encounter with Madelyn. Now it was my turn to enter the 4-foot deep water and as I went down the ladder, a sting ray glided under my feet. Finally it left and I was on the sand bar on the way to getting a photo made instead of taking the photos. And I was still clothed in my shorts, t-shirt and sun hat. Donna Collins of Fort Worth reached out to escort me straight to Madelyn. Dwayne told me to touch her spine and he snapped a photo. Her skin did feel like velvet. It was one wild experience we were all happy we had.

Then the big kiss happened. Dwayne told me to kiss her so he could get a photo and I did and he did. But after the kiss, my facial expression showed it all. Madelyn didn’t taste good to me or Sharon. 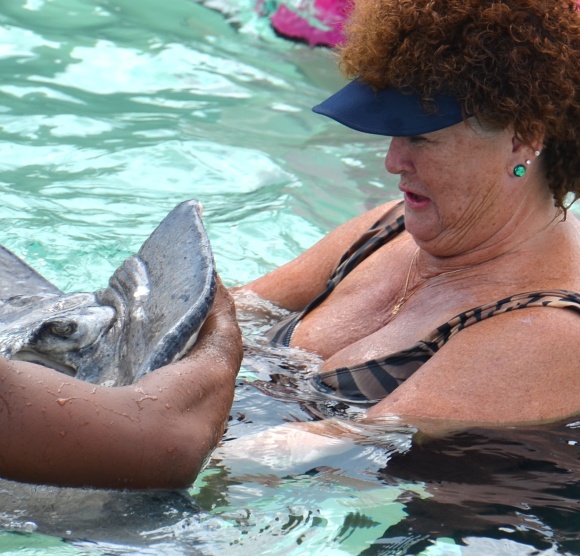 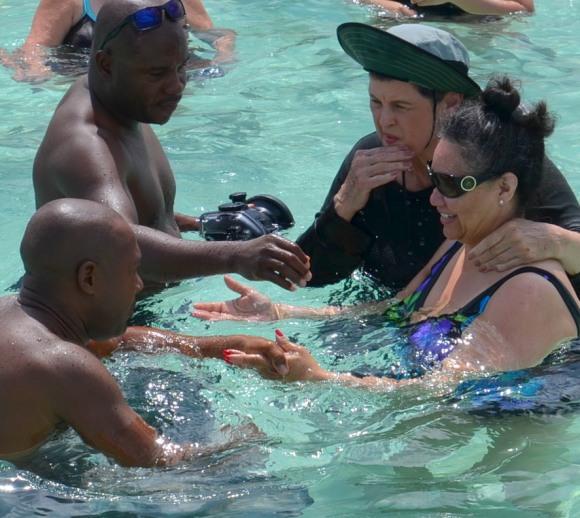 The finale was the most awesome of all. The photographer had returned from the boat with a second plastic  gallon jug full of squid. And several of us wanted to feed Madelyn a treat.

But her mouth was on the bottom. So we had to put our hand under her body, find her mouth and put the squid in it. “She won’t bite you, Dwayne said, “Because she doesn’t have teeth. But she does have plates that rub together.”

Sharon was the second person to feed Madelyn a snack. And she screamed after giving her a treat “because it felt so different.” Each person had to hold the squid snack with all fingers mashed together making for a perfect pinching surface. But all safely fed Madelyn a treat. When all photos had been taken, Madelyn and her other sting ray friends had eaten 2 gallon jugs full of squid. And there wasn’t a crumb left.

Too soon, the wild fish encounter was over and we had to say farewell to Madelyn and her family who just swam away. We all agreed the experience was one of a kind and a once in a lifetime adventure we all would treasure and remember in Grand Cayman with a school of sting rays. And not one of us stepped on a sting ray or made one mad the entire encounter and we all were happy for that. And Madelyn left satisfied and happy after getting all those squid treats and human kisses.

One reply on “Kissing Madelyn in the Cayman Islands”

Hello, I am the daughter of Constance 🙂 I’m the 14 year-old. My mom told me all about you and your travels, it’s so interesting! I really liked reading this, I never knew this about sting rays. The Cayman Islands seem fun, I would love to travel there someday.