We had just looked out the window and there they were, moving fast towards our ship and our balcony. “They don’t all look Polynesian like the other people we had seen,” Sharon and I said, as we had been to the Tahitian and Marquesas Islands in the South Pacific.

Then, we saw them stopped next to our ship. And the next thing we knew, they were on our ship, all 33 of them. We knew who they were so we were not worried, but we had never seen or met them.

These visitors were the Seventh generation of the 7 mutineers of the Bounty, plus wives and friends. The Bounty was a small armed British merchant ship of the Royal Navy that was on a botanical mission when the mutiny occurred. And that mission was to go to Tahiti and collect breadfruit plants and seeds and take them to the British islands in the West Indies for food for the islanders.

These visitors had left their island for a morning with us and to sell us their many handmade items and island products on the Crystal Symphony cruise ship. The waters were too treacherous for our ship to stop and it took several attempts and areas before we could successfully anchor hundreds of feet/meters away.

And we couldn’t have docked on the island anyway because the island didn’t have a dock except for a tiny landing spot for a small boat. So, the islanders and the ship created a method by which each could meet and greet each other.

These visitors were from Pitcairn Island, an isolated British Overseas Territory in the eastern South Pacific, a bit larger than Monaco. It is located half way between Panama and New Zealand and the 7 mutineers and 41 others on the Bounty in January 1790 selected this 18 square mile (47 km) small volcanic mountain sitting alone in the ocean with treacherous and dangerous waters surrounding it.

Thus, this was the reason the mutineers, under the leadership of Captain Fletcher Christian, chose this island on which to land and live.
It also, was in the wrong location on the British maps so Captain Christian knew they would never be discovered by the British. For when the British found them, they would be taken back to England and punished for the mutiny. The British finally found them in February 1808 and the mutineers had died by then.

And so, the 7th generation mutineers, along with Dennis Christian, descendant of Fletcher Christian, came to visit with us as we purchased their items in the small market they set up around the ship’s pool with Pitcairn Island visible from all angles. And while they were setting up the market, Melva Evans, Director of Tourism on Pitcairn Island, talked to us in the ship’s conference room about living on an isolated island in the South Pacific. Besides, selling Pitcairn to the outside world, she takes care of her 90-year-old Mother, a native of Pitcairn Island. 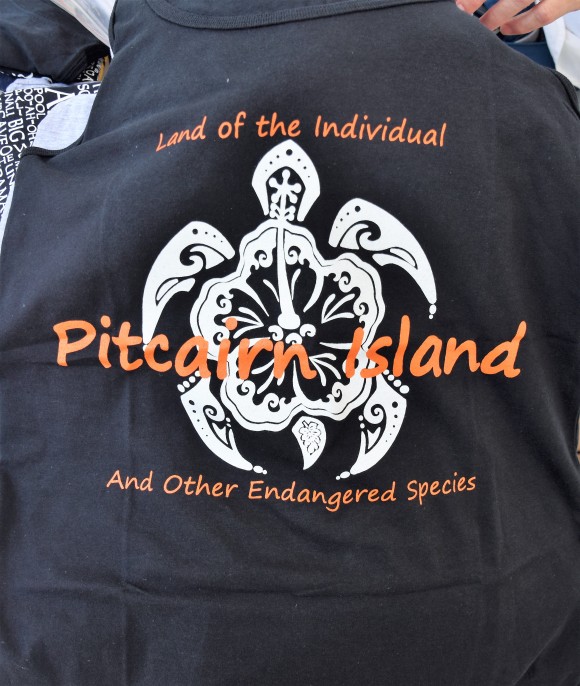 Evans began by telling us in 2016, Pitcairn was named a Marine Protective Ecosystem and the largest marine reserve in the world because it is pristine and almost untouched. And then she began to tick off item after item to explain what it is like to live on Pitcairn:
*●All residents of Pitcairn are Seventh Day Adventist
*●Whales come around the island May to November
●Residents have located the Bounty’s anchor and ballast and house them in the Bounty Museum

●The island has great fishing and every year on January 23 “Bounty Day”, the residents catch fish and have a fish fry in honor of the Bounty landing on Pitcairn. Plus, they build and watch a replica of the Bounty burn in Bounty Bay until it all disappears into the ocean just like they did when they came to Pitcairn. When the mutineers landed on Pitcairn, they unloaded everything from the Bounty and then set it on fire until it disappeared in the ocean so the British would not find them.
●All plants and animals on Pitcairn are endangered except Miss T, a Galapagos tortoise who loves everyone. 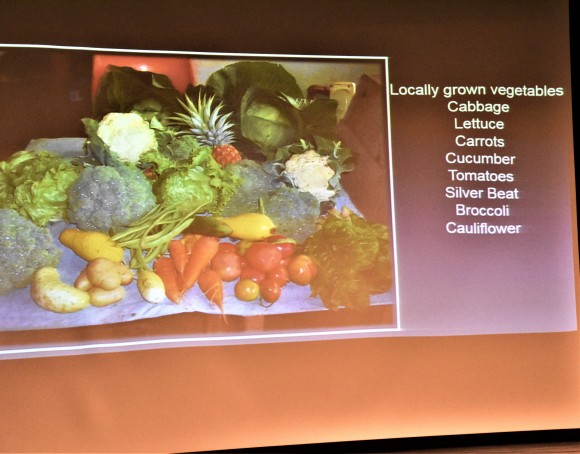 ●When the mutineers arrived, they brought breadfruit plants and seeds with them for planting. Now they make everything with it. The mission of the Bounty was to collect breadfruit seeds and plants in Tahiti and take them to the West Indies for the people to plant.

●The names/areas of the villages are named after the mutineers
●Anyone who wants to live in Pitcairn is given land for a house and garden.

●When the mutineers arrived at Pitcairn, they immediately set up a village, complete with church, police, community center, school, medical center, post office and now internet office. The government treasurer is the bank 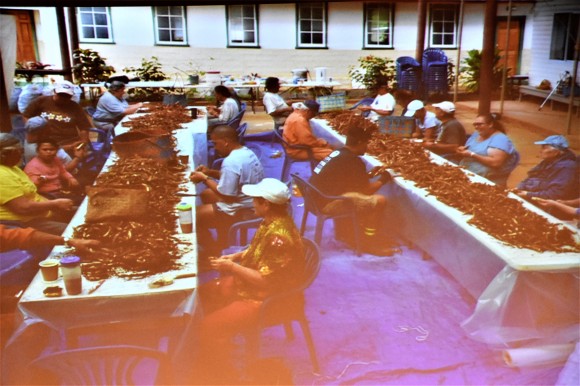 ●All residents of the island help with the sugar cane harvest and they work with the arrow root. They gather at the Community Center and make an assembly line.

●To celebrate Christmas, the villagers cut a tree and take it to the town square where each person decorates it with a can of food or food item, and then they have a meal using the different foods from the tree.
●Three generators provide electricity 6 am to 10 pm. and are looking into wind generators and solar panels.
●A monthly newsletter is published online or can be sent by snail mail 4 times a year for $40.

●Honey is produced on the island and is certified the purest in the world because there are not many pollutants there.

●The economy is individual or family. Arts N Crafts, and government is the main source of income for the islanders.
●Islanders do not make much money so taxes are low.
●To get products, the residents order online to New Zealand and a boat arrives every 3 months with the products.

●Their source of water is rain and 4-5 tanks are at each house to catch that rain water.
●Around Pitcairn, there are very few sharks.

●To get to Pitcairn, one must fly to Tahiti, then to Mangareva Island and then take a boat 355 miles to Pitcairn. The journey takes 30 hours and 2 nights and 1 day.
●Those wanting additional education go to New Zealand. Basic schooling is provided in a one-room school house on Pitcairn where 3 different levels of learning are offered. 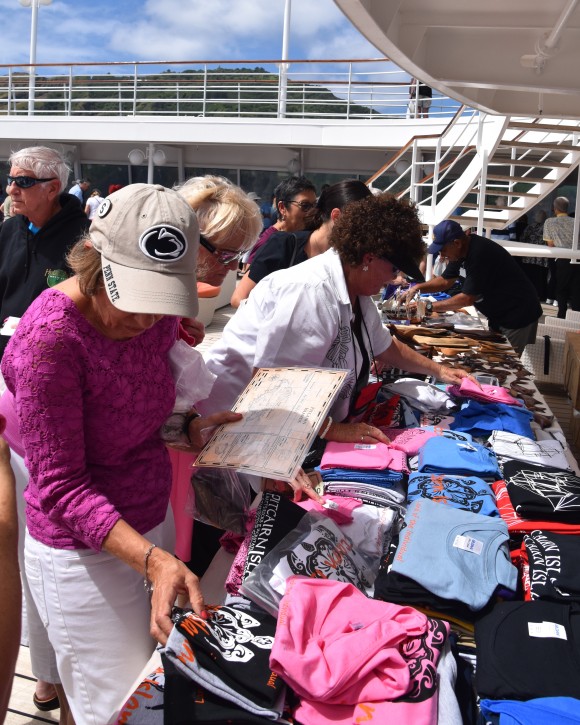 ●Meat is imported from New Zealand, but Pitcairn has goats which are pinned.
●The island does not suffer from typhoons.
●The Postmaster, Dennis Christian, does not collect taxes as income is so low

After the slide show and speech, it was shopping time and we all had fun getting something from Pitcairn Island.
Then it was time for them to say good bye and they did it in a grand way.

All of them came to the ship’s lobby and sang their Good-Bye song for us and then returned to their awaiting long boat full of new items, less souvenirs and more cash. And then as they rode out of sight just like they came in, we waved good-bye and they waved good by and it was a win-win visit for all of us.

And again, we looked out our window to watch them disappear to their most isolated island on Earth. And we were happy and they were happy.