When we saw each one, our joyous screams of amazement permeated our vehicle because each one was a little different from the other ones we had just seen. It continued like this each day for our 10-day tour of central and southern Pakistan.

Any object with wheels was subject to decorations. When I asked one driver why he decorated his truck, he explained “everyone does it.” They do decorate. When one does something new, many copy it and others try to do bigger and better, making it competitive and one-up-man-ship. We rarely saw an undecorated vehicle.

Dump trucks, 18-wheeler trucks, cargo trucks and all other kinds of trucks were dripping in some kind of truck jewels. We saw decorated tanker trucks, tractors with decorated trailers, buses, tractors and trailers, and tuk-tuks. Anything that moves is decorated. It was an exciting drive and going to sleep was out of the question because we didn’t want to miss seeing one rolling art vehicle.

First, paint is used to decorate the various vehicles. Then they add bells, ironwork, fringe, pinwheels, horns, lace, plastic, metal, wood, glass, fabric, strings of lights, and neon lights also are used and anything else they can find. Driving an artistic truck is their pride and joy, their job, and home away from home.

Some even decorate inside the cab, including seat covers, to ceiling and all around. They use the same color combinations as outside. And some trucks only have a door barely big enough to enter the cab because they want to keep the theme all the way around the truck without interruption.

Many trucks had an extended front bumper 1-3 feet (1/3-1 meter).  Some had fangs, or 4-5-foot (1-1/2 meters) tall iron spikes made into a columns or single rods spread out across the front extended bumper. Candlestick-looking objects stuck up around the edge of the 1-3 foot (1/3 to 1 meter) extended bumper. All of these ornaments made the truck look mean and vicious to me and some resembled the horns on a rhino.  All the people we talked with had their trucks decorated by professionals with the know-how as the truck only has a short time between hauls.

Some even decorated the windshields and left just enough clear so they can see to drive. Some trucks beds were double and triple high, depending on the product they are carrying. Just harvested top-quality Pakistani cotton is one of the products trucks haul to the mill. Vehicles carrying cotton are a sight to behold. 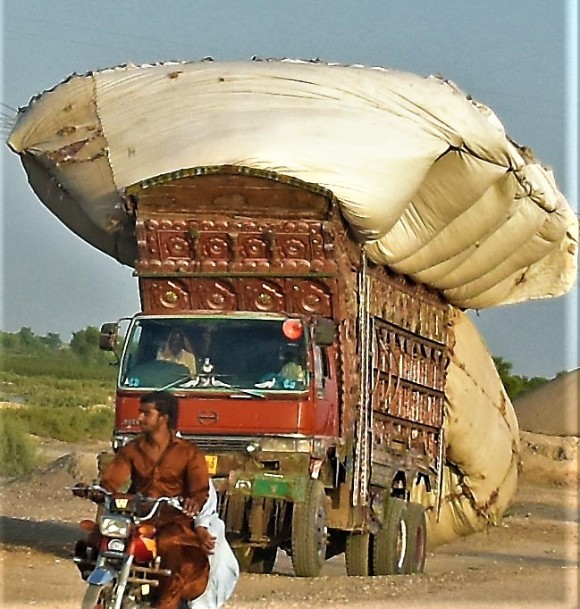 The owners spend thousands of dollars making their truck one-of-a-kind and outstanding.  Different, highly decorated trucks, buses or tuk-tuks generally get noticed and hired more often than plain ones. One tuk-tuk driver told me that he has customers who pass up other tuk-tuk rides to wait for his highly jingling tuk-tuk.

He spent $1000 to decorate his tuk-tuk because he takes and picks up children from school.  “I do it for the children and they love riding with me and the parents know they are safe with me.” Then, he had to go because school was over and he had to be there waiting for the children.

Using all of these truck art media is to show passion, love, storytelling, characters, politics, people, spiritual gurus, sports figures and anything that has meaning. Decorating has become a part of the Pakistani culture since the 1920’s when a Bedford truck was imported from England with a crown on the hood. That started the popular vehicular art which is now imbedded into the Pakistani vehicular culture.

As our outstanding guide, Didar Ali, and driver, Munir, were taking us down the roads of southern Pakistan, we would see a truck or a tuk-tuk (a motorcycle-like transport) stopped on the side of the road, I would ask Didar if I could talk to the driver. Immediately, Munir would make a U-turn and Didar would meet the driver and get permission to talk to him.

Interviewing the drivers turned out to be a major attraction for the people in the area. At one Tuk-Tuk interview, up to 75 people gathered around us to listen to the questions and answers. Didar would listen to the question I wanted in English, then ask the driver in their local language, and tell me the answer in English. It was so much fun and everyone seemed to enjoy the interviews.

One driver, Maqbool, a 30-year-old father of two we talked to, was on a 15-minute break and had just a few minutes to tell us about his artistically-designed truck. He said he began driving-hauling for his father and now he owns two trucks. He has black and white strips and tassels hanging from his truck to keep evils away. He said “It is my hobby and interest to make my truck beautiful.”

And to do this, he has spent $8000 USD so far. He hauls cookies for a company from Punjab to Sindh provinces and loves it even though he only gets a few days off a month. And then he said he had to get back on the road to meet his arrival time deadline.

Asif, a single guy employed by a company, has been driving for 4 years. He hauls coal from Hyderabad to Sindh to Sahiwal and showed us the coal dust on his clothes. Asif explained he got into driving-hauling when someone needed him to drive in his truck-owning-family, so he said “OK.” And he has been driving a decorated truck ever since. 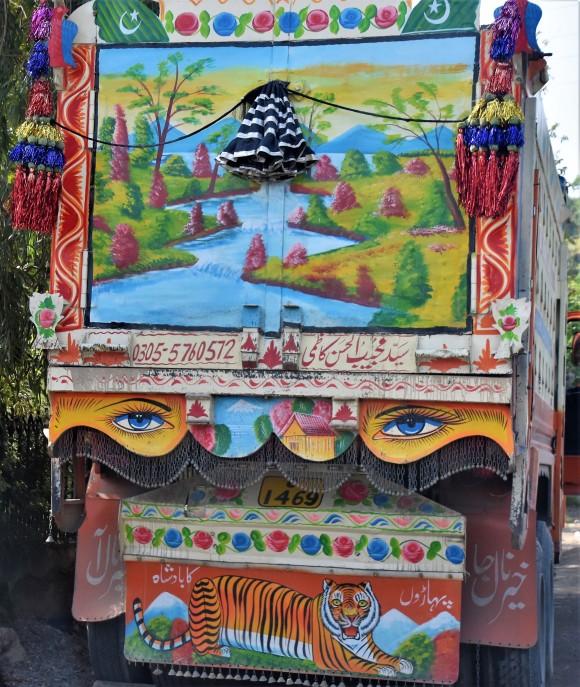 Pashtoon, married with 2 sons, said he bought his truck used and decorated so he didn’t have to hire someone to decorate it. He hauls coal from Punjab regularly except when he hauls in season potatoes to Karachi. “The government does not allow us to carry as many tons of a product anymore”, he explained.

So, why are they called jingle trucks? Well, as they go down the road, many of the items move and make noise like metal chains hanging fringe-like on the bumpers, bells that can hang anywhere they can ring, fan blades and multi-colored pin wheel blades going around and round, tassels that flop back and forth in the air on the truck anywhere, and anything else that makes noise and moves in the wind.

And every now and then they have to pull into a mechanics shop for repairs or another paint job or ornament to keep them shining, jingling and flashing down the roads of Pakistan.  And continuing the creativity and shock and awe ornaments gives those who have never seen these trucks a great thrill.

People keep asking me where I am getting these incredible tours to these incredible countries. And the answer is Spiekermann Travel Service in Eastpointe, Michigan. Should you wish to have a tour like this, contact them at 800-645-3233, info@mideasttrvl.com 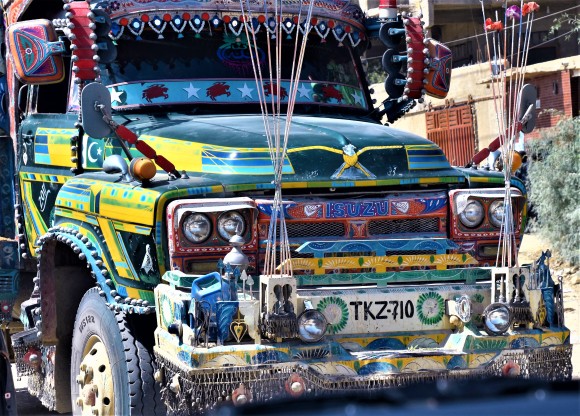