The gravel road we took was unpaved and full of deep potholes and it was a lot of swerve driving to miss those potholes. Thomas Yilma, our guide from KibranTours.com, chose the route over an easier and smoother route because he wanted us to see the Elbore people who live on that route. We crossed dry creek beds one after the other until we came to one that was different. 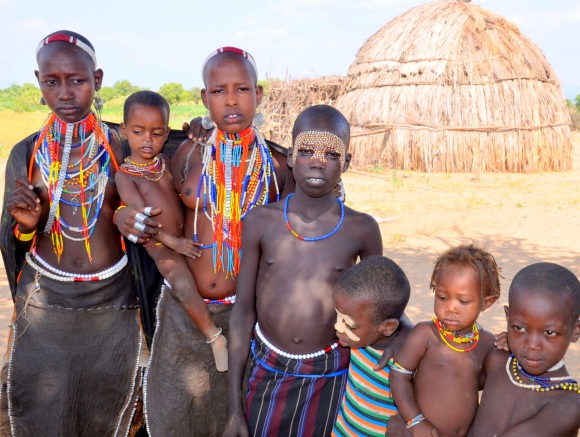 What was different was nine cars parked on the other side of the wide dry river bank causing us to stop. And cattle blocked our way. Suddenly 2 men appeared at Thomas’ window and they talked in the Amharic language of Ethiopia. We had stopped 60 feet (18.28 meters) from a Bull Jumping ceremony, the Rite of Passage of the Hamer people, where a boy becomes a man and can marry. My dream had come true to attend this ceremony of the Hamer people in the Omo Valley of Ethiopia.

But seeing the event was not guaranteed as the event is a private Rite of Passage Ceremony among the Hamer and the date is not known publicly. But by taking the most difficult route, we had found a bull jumping ceremony by accident. And this one was just beginning. 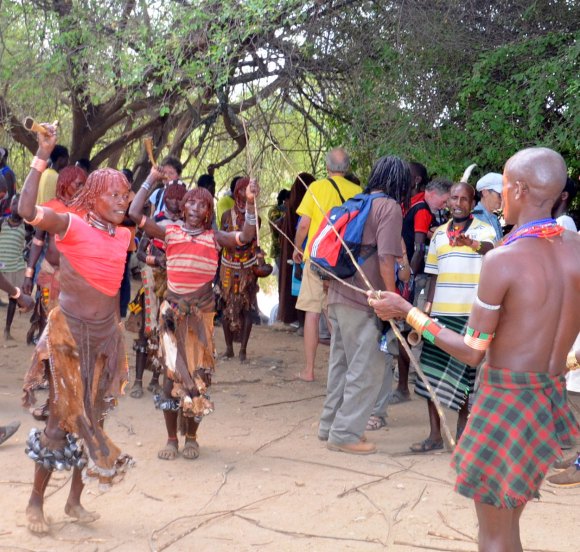 We did not know about it but the rural Hamer people knew when the Rite of Passage Ceremony would be held by using a “calendar.” The calendar was a rope with the number of knots equaling the number of days before the ceremony. Since the rural Hamer people are illiterate, the rope calendar worked perfect. Each day they untie a knot in the rope. So if it is delivered on the 10th of the month and the rope has 20 knots then the ceremony is held on the 30th at a predetermined place. The Hamer people show up ready to support the bull jumper. 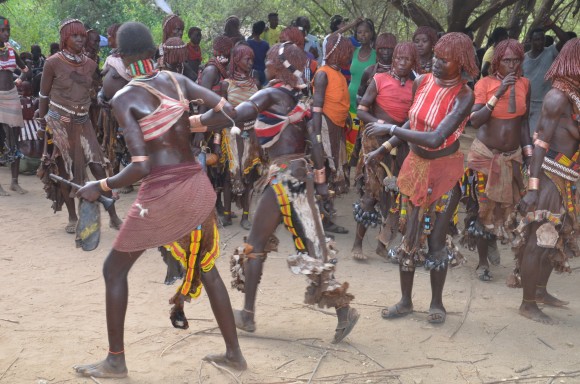 Each of the Hamer people must bring a gift of money or a goat which can be used for the celebration or the jumper’s bride price when he marries. Ike (eye-kay) was the jumper at this ceremony and the Hamer welcome visitors and tourists because they charge a fee for attending any of their events. We paid $75 USD (1500 Ethiopian Birr) for the ceremony for 2 persons. One-third went to the guide we hired to explain everything going on and why and one-third went to each of Ike’s Father and Mother.

When we arrived at the ceremony, Maza men were sitting in a circle painting the faces of other Maza, men who had successfully bull jumped and became men. These men would help the bull jumping ceremony by holding the bulls in place, making sure Ike didn’t fall from the bulls by dropping sticks on the ground to cushion his fall, help him up to the bulls and any other help they could give. Symbols of the Hamer and other designs were painted in different colors and shapes all over the men’s heads, making for a true Hamer work of art. 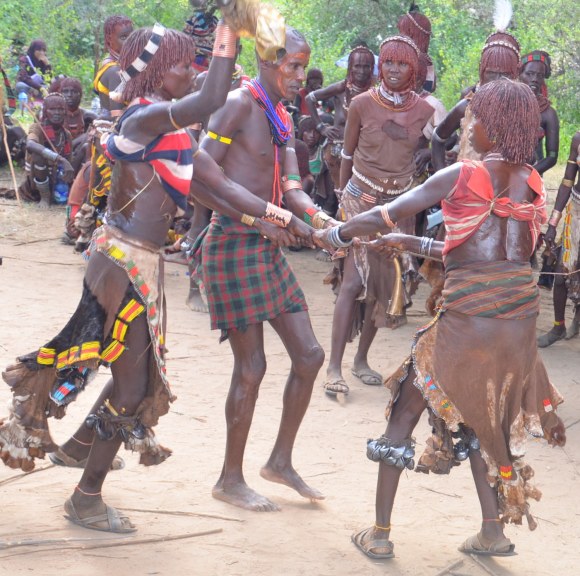 Next to the painting circle, females members of Ike’s family, sisters and cousins, were being whipped by the family’s Maza men with switches signifying good luck for Ike. They slashed the ladies backs so hard that it sounded almost like a gunshot pop. And then blood ran from the cuts. And over and over they were whipped and their backs were becoming full of slashes with blood oozing all over their skin. And the ladies were begging for more, even though the Maza men did not want to whip the ladies.

But it was an honor and tradition to be beat and whipped and the ladies begged for more because they wanted to remember Ike, their life with him and to wish him good luck. And now that he was becoming a man, his life would be different. To be whipped until bleeding was the way they could remember their Ike and have honor among the Hamer. After the whipping, dirt and ash were placed on the cuts and allowed to heal. The dirt causes the skin to pucker, making the scars protrude for all to see their honor of being whipped. 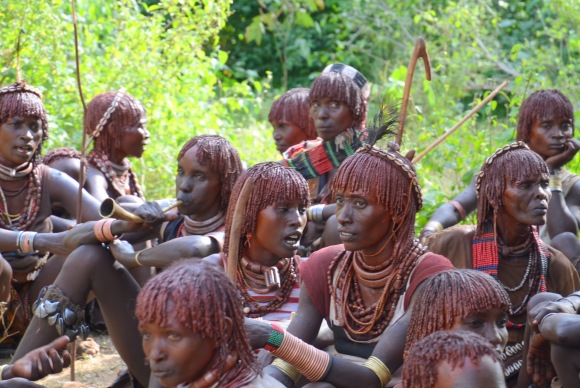 While the whipping and painting was going on, a group of Hamer ladies was singing and dancing non-stop and paying honor to Ike with their rhythmic beats and steps. Watching all of these events were about 100 Hamer people sitting in the shade and keeping up with the beat themselves. All the family members had a job in the ceremony, from singing, cooking, dancing, painting, whipping, helping with the bulls, counseling the boy on being a man, and donating a goat for the celebration afterwards.

Now it was time to go to an area deeper into the bush where the Bull Jumping Ceremony was being held. So everyone left en mass and walked 3900 feet (118 meters) on the gravel road into the bush where the ceremony preparations were beginning. about 15 feet (4.57 meters) from the ceremony area sat Ike. He was 10-year-old, not 17-year-old, and was sitting on a Hamer pillow that was a 9-inch (22.66 cm) high wood seat in the shape of a “T.”

He looked unhappy and confused. He did not smile or even talk to me or acknowledge my greeting. He barely participated in a photo. As I held his hand, I noticed it was limp, delicate and cold. We wondered if he was into this ceremony.

Ike, now, was called a “ukule”, a boy about to jump the bulls. He had a goat skin over one shoulder and a cloth tied around his waist. Inserted at the waist in the cloth was a a wooden phallic symbol, called a “ukule boko”, symbolizing a boy about to become a man. His head was shaved except for a 3-inch long Mohawk stretched from the crown to the nape of his neck. Sitting next to him was a Maza family member bodyguard.

Now it was time for Ike to be counseled by other Maza about becoming a man and the responsibilities and duties he must follow. He was taken into the circle of men and stripped of his goat skin and cloth. He was now naked symbolizing that he came into this world naked and lived one life. Now that he was becoming a man, he is naked again to begin living his second life as a man and marriage.

About 12 men formed a circle with Ike in the middle. They told him what it is to be a man among the Hamer people and he was expected to follow the traditions. And Ike would have to pledge that he would abide by only eating blood, milk, honey and meat until he married. He promised he would although he had many years before he would marry than older boys. 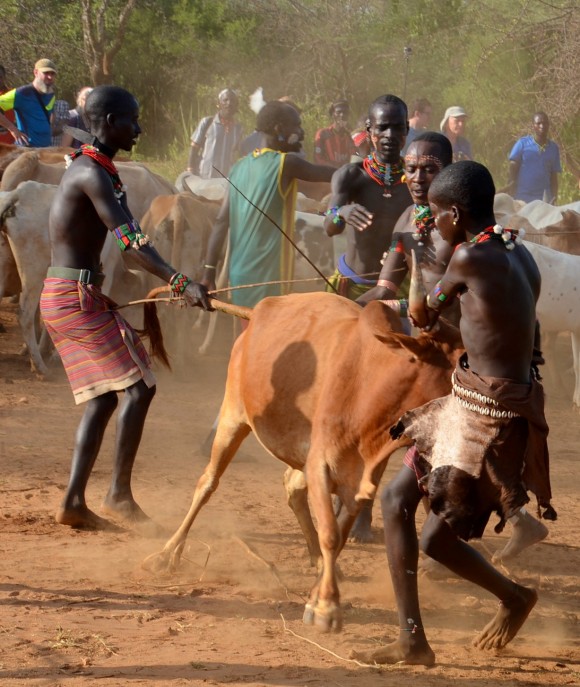 The bulls were being lined up side by side by the Maza men. Some bulls cooperated and others had to be pulled and shoved and lifted into place, but finally all 4 bulls were ready to be jumped. But it was normal that a ceremony had 10-12 bulls. However, Ike, being only 10-years-old, his family decided 4 bulls was enough for him to jump. And the bulls would be small as Ike was small and young.

So Ike began each jump of the 5 jumps with about 200 family members and tourists watching. He ran and took a flying leap up to the back of a 4-foot-bull and fell before he even reached the back of the first bull. Everyone became totally silent and shocked. So he tried again and this time a Maza man helped lift him to the top of that first bull and it was acceptable for a 10-year-old to have help. It would not be for a 17-year-old. Ike was able to jump from back to back to back of each bull successfully, landing on the ground standing up. Each bull’s back was about 2 1/2 feet apart.

Then he took a flying leap for the second try and again successfully jumped the 4 bulls again. And the third and fourth try was successful. The fifth try also was successful and Ike landed standing up and was declared a man and a Maza, a man who had completed the bull jumping ceremony. He then would pass the wooden phallic symbol, the ukule boke, to his half brother when he was ready to jump the bulls.

I congratulated Ike on becoming a man and he still was not smiling or happy. He had the goat skin over his shoulder again and the cloth around his waist sitting again on the Hamer “T” pillow. Finally, I was able to get him to give a thumb up signal but with no smile. He was the last to leave the ceremony area successful as a man with his bodyguard at his side. 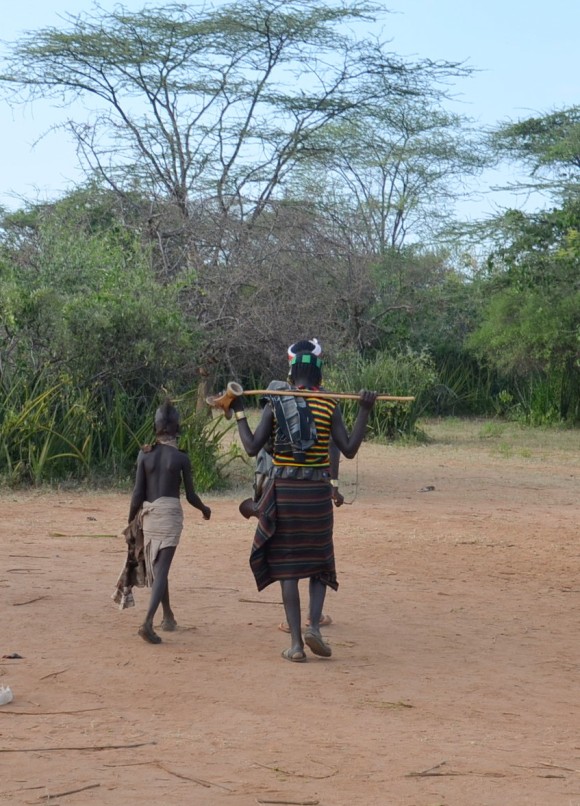 If Ike had missed a bull and fell to the ground, he would have been ostracized by his family for one year. And he would be whipped and mistreated by them for embarrassing them. But he would be allowed to attempt another jump in one year. 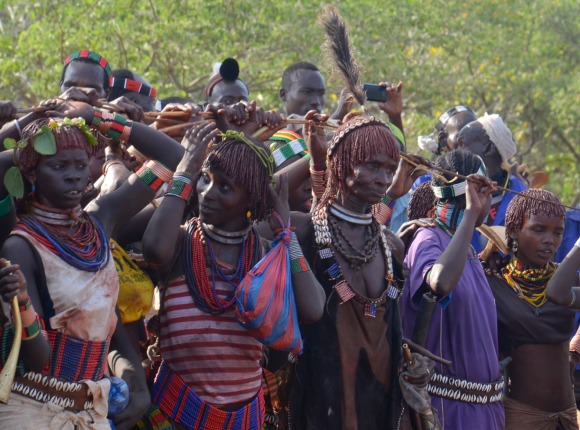 Usually a 16 or 17-year-old boy jumps 10-12 bulls to become a man. But this Bull Jumping Ceremony was for a 10-year-old boy. Ike’s 17-year-old brother had died and his parents decided it was time Ike became a man. Ike’s father could marry as many women as he could afford with the bride price of buying a woman from her family with cows, and if he could afford to take care of his children and wife. 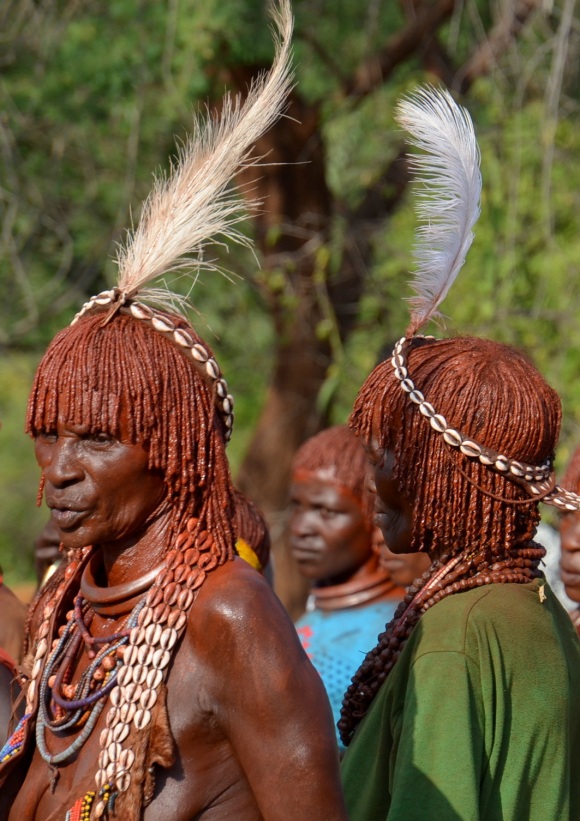 Cows are like money to the Hamer people and they determine a person’s wealth. Ike’s father had 3 wives and Ike’s Mother was the first wife. The first wife among the Hamer people has absolute power and authority over all wives and husband. Ike was the only living son of wife #1 and wife #2 had a 17-year-old son and wife #3 had a 17-year-old son, all ready to become a man by jumping the bulls.

Ike was forced to do the bull jumping ceremony now. If he didn’t, he would block his half brothers from becoming a man and marrying. He had no choice at 10 years-old. He had to become a man even though he was a boy.

The next day, the Wetele Ceremony was held in honor of Ike becoming a man, but Ike was not at the ceremony. He was with his Father at his Father’s home and this event was at his Mother’s home. It is not unusual for the honoree to be absent from his Wetele celebration, which means the grilled goat that is served to everyone.

At this ceremony, Hamer people were singing and dancing and grilling goats that were donated for the event. About 200 people were in attendance and several goats were sacrificed. Strips of meat were put on sticks around 2 bonfires to cook for 2 hours. Hamer ladies were baking bread from maize.

The wondrous smells of bread and grilling meat filled the air and all enjoyed the food, the celebration and Ike becoming a man. And soon, the ceremony will be held again for Ike’s 2 half brothers who will then become a man and eligible to marry because Ike jumped the bulls successfully.