Three orangutans with toe sacks over their heads, a bear that used to dance, a jaguar wanting meat, and an elephant having a pedicure were part of a unique animal experience Christina and I had on our behind-the-scenes tour of the 94-year-old San Diego Zoo. Stepping into the lives of this menagerie of animals for a few minutes reminded me of my many African safaris. And visiting one of the top zoos in the world for preservation of species and humane treatment of animals was a thrill.

The purpose of my trip to the 100-acre San Diego Zoo was to see the seven elephants in their new multi-million-dollar state-of-the-art Elephant Odyssey and Care Center. As I came upon the center, I was surprised to see that the custom-built treatment enclosures were in full public view.

In one, a huge, 10-foot-tall African elephant had a foot sticking out of a hole in the enclosure. The elephant’s veterinarian was filing its toenails. Having seen hundreds of elephants in zoos and on African safaris, I had never seen anything like this.

How such a huge animal could submit and place a foot out of a hole in the fence was beyond my comprehension, even though I had cared for many cows, bulls, and calves on our dairy farm when I was growing up.

I learned it takes months of training to show the elephants how to do the procedure because the San Diego Zoo uses cooperative training where the animals are never forced.  One thing that kept the elephant cooperative was the keeper sitting next to the veterinarian. This keeper was feeding the elephant 18-inch-long lettuce leaves. 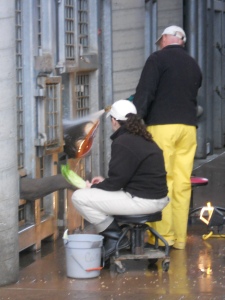 As the elephant got its pedicure, it would stick its trunk out of another hole in the 15-foot-tall steel fence to grab a lettuce leaf.  It did this every 10 seconds throughout the pedicure. I just couldn’t believe what my eyes were seeing.

When I watched veterinarians and keepers shining a flashlight into the eyes and ears of another elephant, I asked what was wrong.

One veterinarian replied, “She has an infection.” As we watched, they gave the elephant a shot in the hip to cure the infection.

Our next stop on the Zoo tour was a visit with Tanya, the keeper of the Orangutans. It was so funny because it was raining and two orangutans were sitting on a tree branch with a toe sack over their heads to keep dry. Next to them on another branch was another one with a toe sack over its head. Keeper Tanya told us that 39-year-old Clyde, the adult male of the bunch, was in his bedroom because he did not like getting wet. Also with him were Satu, Inda and Janey, who brushes her hair every morning, loves to paint and has sold several of her paintings. Janey is the only Sumatran orangutan in the Zoo. The rest are all from Borneo.

The highlight of this stop was when keeper Tanya went into the orangutan habitat and fed them a morning treat of grapes and other fruits. Two of them stood up on their back legs ready to receive the grapes thrown to them just like humans stand to catch a ball. Tanya told us the orangutan gang loves air-popped popcorn, nutritional biscuits, leaves, fruits, vegetables, termites, honey, and barbecue sauce.

Tanya explained that the Zoo has a glass wall to separate the public from the orangutans because “they don’t have immune systems like we do so they easily catch human diseases.” The final fact we learned was why the concrete viewing area floor was covered with shredded rubber tires. I thought it would be to keep my feet and legs from hurting after standing for so long enjoying the antics of the orangutans. But no, that was not the reason. It was because the orangutan’s bedroom was right under the viewing area and the rubber “rug” would keep the bedroom quiet while the orangutans rested!

Our next stop was to see a Sloth Bear.

Now, I had never heard of a Sloth Bear until the keeper told us it used to be known as the dancing bear that performed in circuses and animal shows. It would “dance” like a ballerina with skirt and all. Ken was the cutest bear, with long fluffy fur and long, long claws just like a sloth has. But the highlight of visiting Ken was when the keeper fed him a bottle of water and honey with a straw. A Sloth Bear’s lips are flap-like, enabling it to suck food and water. Watching Ken form those long lips tightly around the straw made us laugh out loud for several minutes. Even funnier, while he was noisily sucking the water and honey, Ken was sitting on his behind with his legs straight out front. Oh, he was so cute.

Next stop was a visit with Orson, a velvety and beautiful black Jaguar. The entire time we visited Orson, he enjoyed five pounds of ground beef. His keeper explained that Orson weighed around 150 pounds and that a female jaguar is gold with black spots and half Orson’s size. 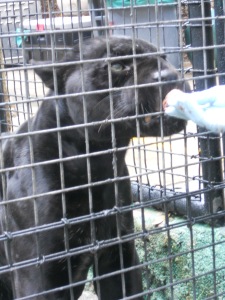 Jaguars come from Central and South America, and have huge feet and a head full of muscles that can bite through a skull.

The Zoo is a breeding ground for many species, and one is the California condor, which has the longest wing span of any bird. Thanks to the Zoo, there are now 400 California Condors in the world. The experts at the San Diego Zoo work with other zoos and animal research centers around the world, helping them with their animal challenges in nutrition, diseases, medical needs, and habitats.

Experiencing the San Diego Zoo on a behind-the-scenes tour gave us the total animal encounter, with surprises all along the way and an education too. Watching the elephant get a pedicure while eating long-leaf lettuce has to rank as one of my most wonderful unexpected sights to behold. If only I could have told that elephant how beautiful it looks with its new pedicure!