Sharon and I decided to try it but we had no idea what it was like.  We soon learned. We screamed all the way down the hill because it was so exciting and scary and exhilarating and unique all at the same time.

It was a ride like no other we had ever done. And we had never visited the island either. The sleigh/sledge/toboggan/sled/car ride we decided to get on was on Maderia Island and it was waiting for a customer so we climbed right in. The sledge was a handmade wicker sofa basket made especially to sit on top of the sledge’s 2 runners. So we climbed into the basket seat with the help of our 2 drivers who would keep the sleigh on track from the top of the hill down 1.24 miles or 2 KM.

We had no seat belts, no rules or regulations to follow, no warnings to follow like keep the feet and arms inside the basket, no wheels, no engine, no emergency rules, nothing. We just had 2 male drivers, dressed all in white and a bowler straw hat, who were masters in driving the sled.

Our guide told us it would take about 10 minutes to complete the ride but it seemed like it took an hour. We started off just fine sliding straight down the hill and thought it would be a simple ride, but we were screaming and laughing and going 30 mph/48 KM all the way down because it was so fast. 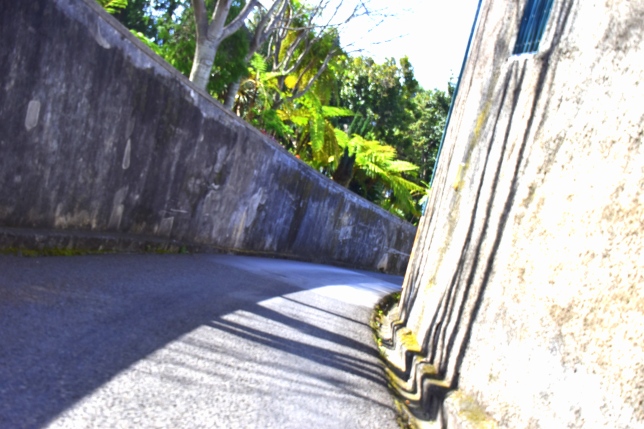 All was normal until we came to a curve. And that is when we started sliding through the curve sideways going 30 mph/48 KM. And the screams became louder and longer. As the sliding occurred at my side, I knew the sleigh was out of control and we were in danger. I even thought we would turn over or crash into the wall. It became a bare knuckles ride that was out of control.

But what I didn’t know was that the 2 drivers had control of the sleigh. It’s just that I thought they didn’t.  I began to learn that each driver had control of the sled with a rope and their feet. The 2 men wore special leather booths with tire tread soles made especially for them so they could control the sledge by traction. And the 2 ropes were attached to the front of the sled, one on each side, that helped them control the angle of the sled from all sides as it went down the road. When the sleigh was in control, the drivers rode behind us on the runners, using their feet to make us go right, left or straight.

We didn’t slide down a dedicated tract.  No. We slid down a public road that cars drive on. And the road was shiny smooth and slick from the many times a sled has gone down the hill. At one intersection in the road, a man holding a stop side, had several cars waiting behind him for us to pass. 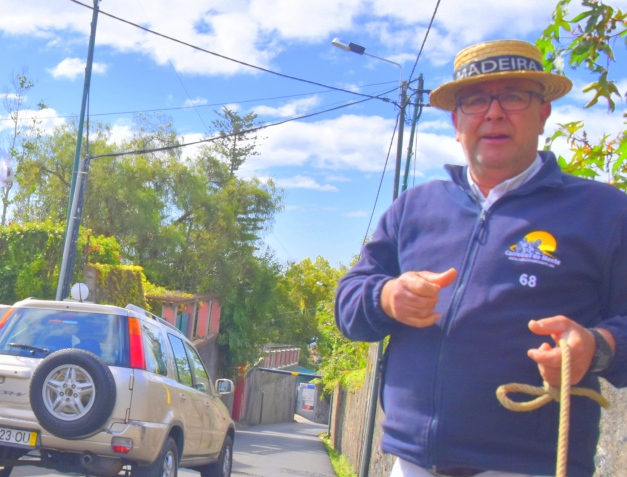 One time, we had to stop and move to the side of the road so a car could pass us. And to get us going again, the 2 men moved from the back of the sled to the front to pull the ropes. Then, as we started going fast again, they quickly moved to the back so they could move the toboggan to the right, left or straight to keep us on the road. And we were screaming all the time.

We later learned the drivers oiled the soft eucalyptus wood runners so they would slide easier and faster when we were stopped to let the car pass by. Then we wondered how the drivers could get traction with oil all over the road from the oiled runners. And how could the cars driving on the slick road keep from sliding down also.

We slid sideways curve after curve and curve. I nearly fell out of the basket and then Sharon nearly fell out because we were going so fast. But we didn’t. We just thought we were going to fall because the speed around the curve seemed so fast. But the men had control of the sledge and we proceeded just fine every time. But, we screamed even louder.

The ride was fairly smooth. When we did come to a bump, it wasn’t a jarring hard bump. We assumed it was because of the soft eucalyptus wood the runners were riding on and they had to be changed often as the street wore them up.

The ride ended when the drivers veered the sled off to the left by pulling on the ropes from the back and dragging their feet, landing right in front of the Toboggan Souvenir Shop and Refreshments area and the man holding the photos of us taken along the way. We just had to buy the $10 photo of us screaming with hair blowing as we went down the road and a t-shirt at the souvenir shop, for we didn’t want to ever forget that exhilarating ride in Maderia.

Writer Ernest Hemingway took the ride and described the experience as one of the most hilarious in his life. We agree with his analysis.

We wondered how this ride ever was invented so we asked Delores, our guide for the tour of Maderia. Mr. Gordon, she said, used to walk down the hill every day to work. He kept noticing the sled delivering supplies down the hill that was pulled by 2 oxen. So he reasoned, it he could make it like a sleigh, he would get to work real fast.

In 1850, he began to ride to work after having a wicker basket sofa designed and attached to the sleigh runners. And he rode from the village of Monte to the Maderia capital city of Funchal in record time. Others noticed his sleigh and the ride became popular with natives and tourists alike.

Where is Maderia Island you wonder? It is a Portuguese island located in the Atlantic Ocean just off the west coast of Africa, about 300 miles from Morocco. It has become a popular tourist destination with all seasons being a great time to visit. It is often referred to as “the island of eternal spring” since the climate is outstanding.

No other place in the world has this kind of ride and Maderia is known as one of the 7 most unique commuter rides in the world. And we screamed and laughed all the way down on the wildest ride of our lives.